I wrote at the end of 2016 about the Future of America’s Drinking Water, and summarized some basic facts about US daily and annual water consumption. For example, Americans consume more than one billion glasses of tap water each day, while just 3% of our nation’s 50,000 community water systems provide safe drinking water for almost 80% of the US population.1This remarkable public health and engineering achievement relies on a vast—and aging—infrastructure, including an estimated 1.2 million miles of distribution pipes that leak and sometimes break spectacularly.2 Considering all sources and types of losses, an estimated 6 billion gallons of treated drinking water are lost every day. In this article, I’d like to focus on the challenges and costs, as well as some opportunities and solutions, associated with water lossin the United States.

Types of Water Loss
Real Losses – actual losses of water from a system, including leaks and overflows from transmission and distribution mains, storage tanks, and service connections up to and including the meter.Apparent Losses – occur in utility operations due to customer meter inaccuracies, data handling errors in customer billing systems and unauthorized consumption; that is, treated water that is consumed but is not properly measured, accounted or paid for.

According to the US Environmental Protection Agency (EPA), “Much of the drinking water infrastructure in the United States has been in service for decades and can be a significant source of water loss through leaks. In addition to leaks, water can be ‘lost’ through unauthorized consumption (theft), administrative errors, data handling errors, and metering inaccuracies or failure.”3 Another important term is non-revenue water (NRW), which includes real and apparent losses, along with unbilled, authorized consumption such as fire-fighting.

Definitions aside, water loss is a universal problem among US water utilities, with an average estimated water loss of 16%. But individual system water loss rates can be much higher—over 30% in aging and economically-constrained systems, including several in and around Chicago, Illinois. Incredibly, an estimated 25 billion gallons of water drawn from Lake Michigan were lost in 2016 as a result of leaking pipes. According to the American Water Works Association (AWWA), the annual financial impact of combined real and apparent water losses can reach millions of dollars for large utilities. A recent report from St. Petersburg, Florida, showed that their recently spiked water loss rate (15% in 2016; which cost the city $3.4 million) was associated with faulty residential meters and deliberate, expanded flushing of distribution pipes to maintain water quality throughout the system. Regardless of their origin, NRW losses are a notorious money pit for utilities both big and small, and an estimated $97 billion (29% of $384 billion in infrastructure investments) will be needed nationally to control water loss over the coming two decades.4 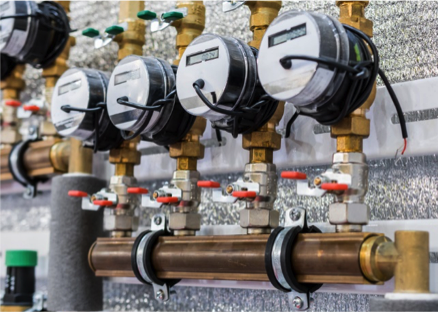 The financial consequence of water loss is substantial. In drought-prone areas of the country, water loss also represents a waste of precious water when treated but not delivered to the customer. The unchecked loss of billions of gallons of treated drinking water could eventually impair the ability of utilities to meet the water demand in the areas they serve.