Turn the Chlorinators on Full-time in Chilliwack

Chilliwack, British Columbia is the site of an unfolding controversy over whether or not to add chlorine to what residents say is some of the best tasting drinking water in all of Canada.  The Fraser Health Authority (FHA) recently advised the city of 80,000 people that chlorine is needed in the municipal drinking water based on E. coli bacteria detected in routine sampling.  A CBC news article quoted FHA medical health officer Dr. Marcus Lem as saying something needs to be done before someone gets sick.  Nevertheless, the article reports a large public protest from the community, including Mayor Sharon Gaetz, who says, “The people of Chilliwack are proud of their water, and furious about the idea of adding chlorine.”

Residents of Chilliwack are understandably proud of their prize-winning groundwater-based water supply.  The FHA points out, nevertheless, that “projected population increases over the next decade will put pressure on the water infrastructure, and the associated risks to the water distribution system” (TheProgress.com article). Dr. Lem told the city council the fact that E. coli was found more than once “probably means you have fecal contamination all the time.”  The article stated that whereas Dr. Lem “was willing to take a big sip of Chilliwack tap water while making a presentation to the council,” he would never let his daughter drink it.

According to a February 6, 2013 Vancouver Sun news article, E. coli has been found three times in samples taken over the past few years.  These were investigated and determined to be caused by a vandal, a bat and possibly a fire hose.  Each instance was said to be quickly determined and remedied.  Additional E. coli incursions were noted between 2003 and 2006, according to the Vancouver Sun (February 18, 2013).

Currently Chilliwack maintains an emergency standby chlorination system that it activates once microbial contamination is determined to be present.  Although water sampling is done 42 times a week, which is twice as frequently as is required, Lem asserts that is not enough for a system of Chilliwack’s size.  In a worst case scenario, at the current sampling rate, it could take up to eight or nine days to confirm the presence of contaminants. This leaves an unacceptable period of vulnerability to water consumers.  An upgrade to continuous chlorination will cost the city $1.5 million, and $100,000 per year to maintain (TheProgress.com article).

What Chlorine Will Do for Chilliwack

Adding chlorine to Chilliwack water will provide long-lasting protection from E. coli and many other pathogens that could cause illness and even death.  As in other systems that employ chlorination, the chemical’s presence should be monitored throughout the water system as a measure of the system integrity.  For example, if the distribution system is somehow compromised by a leak, the chlorine residual would swiftly decline as chlorine combines with extraneous organic material. Close monitoring of the residual throughout the distribution system would prompt operators to investigate the residual decline in real time, enabling swift discovery and repair.  The ongoing need to monitor residual chlorine is accentuated by the aging of any water and sewerage infrastructure, which significantly but silently increases the likelihood of contamination. 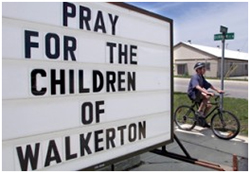 Walkerton, Ontario was the site in 2000 of the worst public health disaster involving drinking water in Canadian history.

Another Canadian community, Walkerton, Ontario, serves as a tragic example of what can happen when chlorination is improperly implemented.  In 2000, the water facility of Walkerton became contaminated with E. coli and Campylobacter bacteria; spring rains had washed cattle manure into the groundwater supply.  An ensuing outbreak sickened 2,300 residents and killed seven people because the water was neither chlorinated adequately nor monitored for chlorine residual levels for several days.  Proper monitoring would have revealed an increased demand for chlorine and catalyzed operator action.

Great tasting water is not a guarantee of safe water. Dr. Lem has presented evidence of drinking water contamination.  Before another waterborne tragedy plays out in Canada, the chlorinators in Chilliwack should be turned on full-time as an additional barrier against serious illness.  If this is not done, Chilliwack could become a case study in probability:  Roll the dice and see what happens.

Fred Reiff, P.E., is a retired official from both the Pan American Health Organization and the U.S. Public Health Service, and currently lives in Reno, Nevada.