“Remember the Alamo!” was the battle cry of Texans avenging the deaths in 1836 of nearly 200 of their own at the hands of the Mexican Army at the Alamo, a small mission chapel in San Antonio.  One hundred seventy-two years later in Alamosa, Colorado—a place with a similar name—a different sort of battle was being fought.  A waterborne enemy, Salmonella bacteria, launched a surprise attack on the community, killing one person and sickening up to 1,300 others.  The community rose up to meet a deadly challenge. 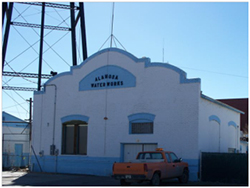 In 2008, the Alamosa water system served about 8900 people. Groundwater was drawn from three very deep wells and stored in two elevated water towers and one ground-level covered reservoir. The city had been granted a disinfection waiver in 1974; arsenic in the water supply was one problem noted, but bacteria were not. Nevertheless, bacteria found a point of entry into the system in early March of that year.

A 2009 report by the Colorado Department of Public Health and Environment (CDPHE) focused attention on the Weber Reservoir, a 320,000 gallon rectangular concrete structure built in 1979.  The reservoir was in poor condition and had not been maintained adequately for a number of years. The roof and sides of the concrete structure showed several cracks and holes.  The relatively warm environment of the storage reservoir could have made it “an attractive location for wildlife to gather,” according to the CDPHE report. During the winter following the outbreak “numerous footprints from small animals in the snow inside the fence surrounding the reservoir” were observed.  In July of that year, bird feces were noted on the top of the tank including in the area of one of the corners repaired after the outbreak.

Based on data collected in Alamosa and a relevant literature review, the CDPHE report concluded Salmonella probably were delivered to the Weber Reservoir either by an animal or fecally-contaminated runoff.  The contamination affected the entire city’s drinking water; the CDPHE report states that a telephone survey found about 40 percent of the infant population of Alamosa was sick during the outbreak.

As an immediate response to the outbreak, chlorination equipment was installed; the whole system, including the three storage tanks and 50 miles of distribution lines, was dosed with a high level of chlorine to eradicate Salmonella and then after sufficient contact time, the system was flushed to reduce the chlorine to the desired residual level. Disinfection with chlorine is a highly effective method of destroying Salmonella.

A “bottled water advisory” was issued by the Colorado Department of Public Health and Environment team.  A “boil water advisory” was not issued at first because there was concern that arsenic levels could be elevated in drinking water during system flushing and by consumer boiling.  According to the investigative report, “a bottled water advisory for such a large system in response to an actual disease outbreak was unprecedented in Colorado and presented a major public health challenge along with severe community disruption and economic impacts.”

Media reports from the Easter weekend of 2008 describe volunteers from Alamosa and surrounding communities delivering bottled water and informational flyers to residents.  The bottled water advisory was followed by a boil water order; after three weeks the municipal water was deemed safe. Continuous chlorination has been in effect in Alamosa since late-March, 2008. Chlorine residual monitoring is conducted throughout the city, and no further outbreaks have occurred.

In the wake of the Alamosa outbreak, Colorado’s Safe Drinking Water program implemented several strategies to reduce the likelihood of further waterborne disease outbreaks in the state. Among these measures are: prioritizing responding to problems at water systems that do not disinfect; enhancing oversight of sampling, water storage and distribution piping during inspections; and launching training initiatives to help public drinking water systems optimize storage and distribution system operating and maintenance practices.

A significant lesson from Alamosa stems from the fact that routine bacteria monitoring—called “total coliform monitoring”—is not a good indicator for the culprit in the outbreak, Salmonella.  Although Alamosa officials were not sampling city water properly, the report states it is possible that even appropriately collected Salmonella-contaminated samples could have been analyzed as negative for this pathogen. The CDPHE report underscores this fact as a strong argument for all water systems to provide disinfection, especially in light of the fact that ingestion of as few as 10 Salmonella organisms may be enough to cause illness. Communities that resist disinfection, such as the British Columbian city of Chilliwack, should take notice.

The routine provision of safe drinking water is a quiet victory over waterborne illness that occurs in thousands of US communities every day. Unfortunately, it is most appreciated in the context of the possibilities of defeat and the accompanying human loss and suffering.  That’s why it is important to remember the Alamosa outbreak.  Lives depend on it.

Chris Wiant, M.P.H., Ph.D., is president and CEO of the Caring for Colorado Foundation. He is also chair of the Water Quality & Health Council and a former member of the Colorado Water Quality Control Commission.