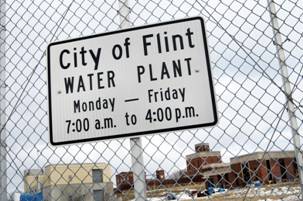 Much has been written about Flint, Michigan’s lead-contaminated drinking water, but we should not overlook another health risk associated with Flint in the recent past, and that is the possibility of Legionella bacteria in the city’s drinking water.  The unchecked corrosivity of Flint’s drinking water may have led to more than one serious water quality issue.  This article focuses on the potential causes of two illness outbreaks in Flint caused by Legionella bacteria.

Between June, 2014 and November, 2015, there were 87 cases of legionellosis* in Genesee County.  Cases peaked during the warm summer weather; 10 of the cases resulted in death.  In previous years, the county numbered between six and 13 illness cases.1

The figure above is from the Michigan Department of Health and Human Services, Genesee County Health Department report, ”Legionellosis Outbreak-Genesee County, May, 2015 – November, 2015, Summary Analysis”.

*Legionellosis refers to any Legionella infection, including Legionnaires Disease or the less severe illness known as Pontiac Fever.

Over time, and with the addition of corrosion inhibitors, such as phosphate salts, water main interior surfaces develop a mineral coating or crust known as a “passivation layer,” according to a recent article in Chemical & Engineering News.2  This layer helps protect pipes while also keeping chlorine disinfectant levels relatively stable.  Beginning in April, 2014, corrosive water from the Flint River effectively “ate away” at this protective layer, exposing iron interior walls and lead-solder joins.  As a result, metals, including lead and iron, were leached into the water.3 Dissolved iron turned the water the color of rust.  And free chlorine, which had been added at the treatment plant to help destroy pathogens, was depleted by its interaction with iron pipe.

According to the Flint Water Study website, Legionella bacteria may have proliferated in the city’s corroding iron water mains, resulting in the illness outbreaks. Two factors potentially supporting Legionella growth are: dissolved iron in the water (Legionella has high iron requirements 4) and lower chlorine levels (resulting in reduced toxicity to microorganisms).  The website notes that these factors were confirmed during field sampling and in research simulating distribution systems.  Under these supportive conditions, the bacteria might have flourished, contributing to the two outbreaks of legionellosis between mid-2014 and late 2015.  In addition, it is hypothesized that the hot water and air-conditioning systems of large buildings became seeded with Legionella, a known occurrence, resulting in the illness outbreaks.  The fact that the two outbreaks peaked in summer months supports the understanding of the temperature dependency of the growth of the bacteria in such systems.

Legionella poses no risk to those ingesting it through municipal water, but a distinct risk to immunocompromised individuals who inhale it as a mist in a shower, for example.  Legionella infection can result in Legionnaires Disease, a form of pneumonia, or a less serious respiratory infection known as Pontiac Fever.  Unfortunately, monitoring in order to compare Legionella DNA in patients to Legionella DNA isolated from the city’s drinking water was not undertaken during the investigation.  The scientific evidence of occurrence in the population, however, linked most cases to exposure to Flint drinking water.  Nevertheless, no particular location was identified as the main source of the outbreak, as was the case last summer when 12 deaths from Legionnaires Disease were traced to Legionella-contaminated cooling towers in New York City.5

It is believed that the same controls that help reduce lead exposure in drinking water can help prevent Legionella growth in water mains.  The Chemical & Engineering News article calls water mains “geochemical reactors.” The term is apt because mains are dynamic systems subject to the changing factors of raw water quality, treatment processes and corrosivity controls. We could even enhance this term by labeling water mains as “biogeochemical reactors” based on the microorganisms that grow in the system, including in the biofilms that line the pipes.  Little is known about the microbiology of water distribution systems and even less is known about the microbiology of premise plumbing, so more work is needed in this area.  At the end of the day, I hope the lessons of Flint have a lasting impact on our collective understanding of some of the factors that alter water quality as it flows to consumers.