By Chris Wiant, MPH, PhD
September 25, 2020
In a nutshell…
This article discusses the potential importance and real challenges associated with reusing household “gray water,” a growing practice in many arid areas of the United States. Although everyone can agree that it will save potable water, not everyone agrees on how gray water should be reused domestically. 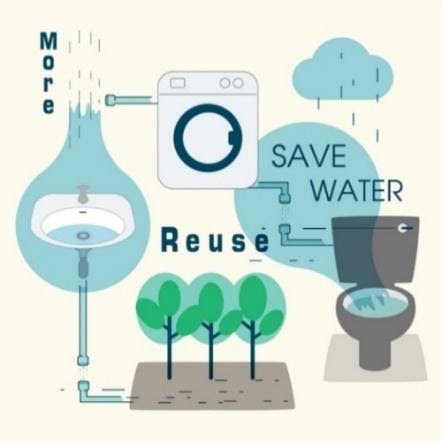 No matter how you spell it, “gray water” generally refers to wastewater resulting from household activities like bathing and washing clothes. Domestic gray water reuse is growing in many parts of the nation as a component of overall water reuse (reclamation/recycling) along with water conservation and rainwater harvesting practices. And so is the sheer volume of information on the sometimes controversial practice.

It remains unclear what constitutes the safe and appropriate use of domestic gray water. More than 20 states allow some kind of gray water reuse, but most lack regulations that allow it or specifically prohibit any form of its reuse. From a legal and regulatory perspective, it is a complex and evolving issue, including in my home state of Colorado.

Common sources of gray water in the home include showers, non-kitchen sinks, and clothes washers. On average, these account for over half of domestic water use. Gray water is different from “black water” from toilets, the latter should never be reused in or around the home because of high risk of contamination by bacteria, viruses, and other pathogens. Used water from kitchen sinks and dishwashers containing food waste can also support the growth of some microorganisms. Although sometimes called “dark gray water,” these waters are typically treated as black water. Gray water can contain hair, grease, oils, soaps, detergents, fabric softeners, and other household chemicals. In general, the content of local gray water is influenced by the number and lifestyle of occupants, treatment (if any), and water use patterns.

In many U.S. utilities, gray water is combined with black water into a single domestic wastewater (sewage) stream for centralized off-site or local on-site (e.g., septic system) treatment. Yet gray water can have greater potential for reuse than black water because of its lower levels of microbial contamination. When gray water is appropriately reused, it has the potential to reduce the demand for treated and disinfected (typically using chlorine-based disinfectants) potable water, while meeting a wide range of domestic needs.

International Gray Water Reuse
Gray water technological advances and regulations/guidance have accelerated domestic reuse in many other nations, such as Australia and Jordan. Appropriate gray water reuse, in conjunction with expanded conservation, can help protect and extend finite freshwater supplies. Given growing water scarcity in many regions of the world, separating and locally reusing gray water from communities with effective sanitation is a potential option for potable water and wastewater management.

Most U.S. homes have one set of pipes that bring in potable water for all household uses and another that takes “once-used” water away. Many experts consider this conventional practice to be wasteful and inefficient, especially in arid areas. By matching water quality to the specific water need, gray water can replace the use of potable water in many applications where potable water is not needed, such as toilet flushing, landscaping, and below-ground irrigation.

A household gray water system collects water that has not come into contact with sewage or food waste. A variety of technologies are available for localized collection, treatment, and use of gray water, ranging in cost from a few hundred to thousands of dollars or more depending on the scale and application. Simple systems may be just a collection barrel with a hose bib for funneling gray water to outside plants. More expensive systems involve separate plumbing systems throughout the home to collect, partially filter or treat, and temporarily store (or it will putrefy) gray water.

Historically, U.S. plumbing codes did not distinguish between gray water and black water. Where they exist, gray water laws, regulations, and policies are set (and enforced) at the state and local government levels. Drought-prone California led the nation in developing the first gray water regulations in the late 1980s, with the recognition that this potential source of water could be used for local irrigation. The evolution and adoption of gray water reuse in the decades that followed has been anything but straight-forward.

Colorado was the last Western state to legalize gray water usage in 2013 as one tool to help close an anticipated future water supply gap, but a tool that still remains in its infancy. In Colorado, only two types of gray water systems are legal. This first one is called “laundry to landscape”; the second is more complex and costly. Water from showers or sinks is collected, treated, and stored in a designated tank for no more than 48 hours before reusing for landscaping or flushing toilets. One widely touted, scaled-up example is at a dormitory at the University of Colorado, Boulder. It was built with separate plumbing that collects wastewater from showers and sinks to flush toilets, using almost 2,000 gallons of gray water (and thus saving that amount of potable water) a day during peak use.

To be clear, not everyone is singing the praises of gray water reuse. Some experts remain critical of the practice, warning that gray water is essentially just dilute sewage. Most concerns seem to center on the risk of contaminating drinking water, whether through faulty plumbing cross-connections or seepage of gray water into nearby groundwater wells, which are not routinely disinfected. Unpredictable and changing environmental conditions, such as rainfall amount, can increase the transport of gray water contaminants.

With increasingly prevalent drought conditions in areas like the U.S. Southwest amidst calls to further reduce potable water consumption, emphasis on water reuse as a means of preserving water resources will likely accelerate. Research on the pros and cons of gray water use and the need to protect public health through effective regulation of water reuse will also grow. Responsible domestic reuse of gray water can help preserve and protect our lakes and rivers that support humans, wildlife, recreation, and the environment. For all of these reasons, it is important to pursue effective solutions to the challenges associated with increased domestic gray water use.

Chris Wiant, MPH, PhD, is the former president and CEO of the Caring for Colorado Foundation. He is also chair of the Water Quality & Health Council and a former member of the National Drinking Water Advisory Council.