Toward a Better Future in Haiti: Chlorinators and the Chlorine Bank Network

Water is one of the world’s most precious resources. It is a basic human need. Unfortunately, 40 percent of the 10 million people in Haiti do not have access to clean water. As a result, many Haitians die from waterborne diseases such as cholera, typhoid, and chronic diarrhea.

Most Haitians gather water from community water kiosks by carrying five gallon buckets to and from their homes. When the water at these neighborhood stations is not treated, International Action intervenes.

Our purpose since 2005 has been to improve the health of Haitians by preventing the spread of waterborne diseases in Haiti. We accomplish this by installing chlorinators in neighborhood water kiosks, which provide communities and schools with access to clean, safe water. Up until 2010, this was our only focus.

The 2010 earthquake devastated the Port-au-Prince and the surrounding areas. Thousands of people lost their lives. Many of the water tanks we had installed chlorinators on were destroyed. We began trucking water and distributing water bottles and disinfecting agents such as Aquatabs®, PUR® packets, and granular chlorine.

Haiti was still reeling from the earthquake when cholera began to spread throughout the country in October, 2010. The people most affected lived in regions without access to clean water, either because the earthquake destroyed their water tanks and treatment systems, or they never had water infrastructure. The cholera epidemic claimed the lives of over 7,000 Haitians.

To prevent future waterborne disease disasters like the 2010 cholera epidemic, every community must have permanent access to clean, safe water. Long-term solutions, like our chlorinators, continue to be our focus. Today, roughly 900,000 Haitians — utilizing 250 chlorinators — have clean water because of our efforts.

Before these 900,000 people had clean water they faced many hardships. Their children were getting sick. They did not have the strength to work. They were spending the little money they had to purchase clean water. 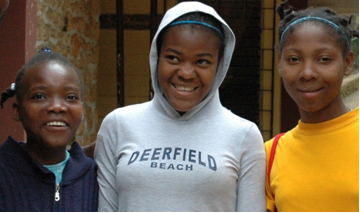 Rochelle, a future nursing student (center) in Haiti, with her two sisters

Rochelle, a future nursing student, has a story that many of her 900,000 fellow Haitians can identify with.

Before we installed chlorinators in Rochelle’s neighborhood, there was no safe water to drink. Disease was rife. One of Rochelle’s sisters had to stop going to school for two months because she had chronic diarrhea caused by contaminated water. Rochelle and her sisters had to purchase water for drinking, depleting money their parents had saved for school.

Once there was clean water, life got better. Rochelle’s sister recovered and has not missed any school time in two years, and Rochelle will be starting nursing school in 2013, because of the money her family saved with affordable clean water.

There are 900,000 Haitians that have a story like Rochelle’s. This has been made possible by the chlorinators that Haitian communities, International Action, and our supporters have invested in. 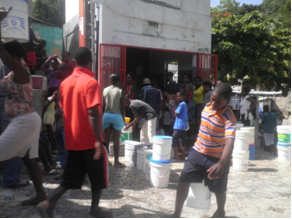 Purchasing chlorine tablets is the only cost after a chlorinator is installed. On average it costs only 20¢ per family a month for every family to have clean water. Currently, International Action is the only distribution center for tablets in Haiti. We consider it an honor to have such an important role in people’s lives.

Haitians are happy that we continue to donate chlorine to them. But like every person in the world, Haitians are looking to improve, to move forward. Rochelle and 900,000 of her fellow Haitians want to claim ownership.

They want to ensure that they will be able to keep using their chlorinators, and agree that a locally run chlorine distribution system will ensure the permanence of their chlorinators. We call this sustainable system the Chlorine Bank Network.

The Chlorine Bank Network will follow a three step process:

Once the Chlorine Bank Network has been established, International Action will turn over operations to bank staff and the communities that the banks serve.

All members will have an equal say and vote on Chlorine Bank Network manners. Collectively, they will determine the selling price of chlorine for all of the chlorine banks. Funds for community leaders to purchase chlorine will come from their local water stations. People are charged 1 to 10 US¢ by water stations for every bucket they fill. Some of this money is used by the community leaders to buy more water, and the rest is spent on chlorine.

We have begun working with community leaders to find locations for chlorine banks. Initially there will be five banks in Port-au-Prince. Each bank costs $20,000 to build, supply, and staff. We need $100,000 to create the Chlorine Bank Network.

The Chlorine Bank Network is a country-changing initiative. It will:

It will take a patient approach — five to ten years – to build up the Chlorine Bank Network to a national level. Once it is done, the health of people in Haiti will be improved permanently.

Haitians want the Chlorine Bank Network. They have the tools; they just need our help and your support.

Learn more about International Action’s work in Haiti and opportunities to support their humanitarian efforts at www.haitiwater.org.