By Stephen A. Hubbs, PE
February 28, 2020
In a nutshell…
Virtually all U.S. public water suppliers flush their distribution systems from time to time by opening “blow off” valves and fire hydrants. Regular flushing of water mains improves water quality and increases the reliability of their treated drinking water. You can do this in your home, too! 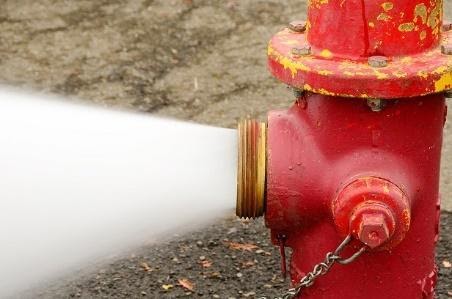 Perhaps you’ve seen and wondered why utility workers or firefighters have opened one or more fire hydrants on your street or in your neighborhood sending large amounts of water into the streets and gutters. Chances are, the flushing you observed, heard about in the news, or read about in a notice from your water provider, was scheduled and part of a planned flushing program for water mains and fire hydrants.

Whether scheduled or following repairs or replacement of pipes or pumps, periodic flushing of the drinking water distribution system is common and essential.

Water main flushing systematically moves water through sections of a drinking water distribution system to scour out the lines. The flushed water is discharged through select “blow off” valves in the water mains or fire hydrants, typically onto local roads or other public areas where it often can drain into nearby storm sewers. Conventional flushing is most common and involves opening hydrants in targeted neighborhoods and streets, running the water until it flows clears from the hydrant. In conventional flushing, because the water moves freely from all directions to an open hydrant, the flows may be too low to adequately clean out or scour the pipes. In contrast, directional flushing involves creating very high water speeds within the pipes by operating valves and hydrants in a specific order, moving water from the treatment plant to the outer edge of the distribution system. Not only does directional flushing increase flow within pipes and out of hydrants, it can also be more efficient (less wasted water). The Massachusetts Department of Environmental Protection has an excellent online fact sheet and FAQ on water main flushing.

The simple answer is to improve the flow, reliability, and quality of water as it moves from the treatment plant to your tap. The increased flow scours the water pipe’s inner walls and helps to stir and remove the build-up of naturally occurring debris and sediment. It also helps maintain the chlorine residual (see more below) that protects the water as it moves to your house. Scheduled and unscheduled flushing is common in utilities across the United States. Flushing is critical to the overall preventive maintenance program of a distribution system and ensures proper operation of distribution system hydrants and valves. Distribution system flushing also allows operators to test and ensure that all fire hydrants are operational and have sufficient water pressure for firefighting. Many utilities coordinate fire hydrant flushing with local fire departments, coupling the processes of routine testing and maintenance of the hydrants with routine distribution system flushing for improved water quality.

How does Flushing Improve Water Quality?

Flushing moves water more quickly from the treatment plant to your tap, reducing the “water age” of your tap water (how long the water has been in the pipes since it left the water treatment plant). Periodic or routine flushing at lower flow rates is widely used to bring freshly treated water into distant parts of the pipe distribution network. This helps utilities maintain adequate residuals of either free chlorine or chloramine in all parts of the distribution network, which keeps the water safe to drink as it moves, sometimes miles, from the treatment plant to your tap.

When Do Utilities Flush their Systems?

Water main flushing is often scheduled in the spring and the fall, but can be conducted at any time it is needed. Flushing is especially common during warmer summer months when it may be necessary to move “older” water out of the pipes. This is because chlorine-based disinfectants in the water are consumed more rapidly at higher temperatures. Warmer water can also create the need to flush the lines during dry or even drought conditions, a necessary but often confusing situation when water conservation measures are in place.

Flushing may be done at any time of day depending on the situation, particularly if there has been a water main break that requires emergency repair. Generally, planned flushing for maintenance or repairs is done during daylight hours when it is safer for crews to work on the streets.

Water main flushing is also an important part of chlorine maintenance in water systems that use chloramine disinfection1 and seasonally switch, typically for a few weeks, to free chlorine for residual disinfection. Utilities are required to notify customers when they switch forms of chlorine as it affects fish in aquariums and dialysis machines.

How Can Water Main Flushing Affect Me?

During water main flushing, there may be a noticeable discoloration or change in the taste and odor of the water from your taps. If you notice that there’s a hydrant flushing in your neighborhood or the water at your tap looks rusty, it’s best to run cold water from each tap until it runs clear. If you have an ice-maker on your refrigerator, it’s a good idea to dump the ice and resume ice-making after the water has cleared. Doing laundry during or immediately after flushing might result in discoloration or staining due to iron released from the pipes. Home filtration systems should be turned off when the water mains are being flushed.

Is There Anything I Should Be Doing at Home?

Routine flushing of water within your house is also a good idea. You may not realize it, but if your morning routine involves a shower or flushing your toilet once or twice, you’ve also flushed out water that has stood overnight in the pipes leading from the street to your house. If you’ve been away from your house for several days or longer, it’s a good idea to flush each tap for a few minutes to freshen the water. In general, the fresher the water, the better! And on that note, be sure to flush and drain your home’s water heater too (though many people never do), according to manufacturers’ recommendations. This keeps the hot water fresher, helps keep the water heater working efficiently, and it’s easy to do. It just takes a hose and a drain!

1Chloramine is produced at water treatment plants by combining chlorine and ammonia, chiefly as a secondary disinfectant due to its extended persistence in water.