Drinking water has been called the 2nd most essential human need (after the air we breathe). Every day, over 50,000 community drinking water systems serve over 300 million Americans, with just 3 percent of these systems serving almost 80 percent of the US population.1,2 Regulated by the Safe Drinking Water Act, and supported by the work of federal, state, tribal and local governments and utilities, the US drinking water system has been recognized as one of the nation’s most significant advances in public health.3

About two-thirds of Americans served by community drinking water systems obtain their raw (i.e., untreated) water from surface water sources, such as rivers, lakes and reservoirs.4 The remaining third are served by municipal groundwater systems using wells, while some systems use both sources. In addition to source water protection, transforming raw surface water or groundwater into safe and clean (finished) drinking water requires appropriate treatment and ensuring its safe distribution to consumers’ taps through on-site premise plumbing. Without adequate treatment, drinking water consumers are at risk of contracting diseases caused by viruses, bacteria, and protozoan parasites, as well as the risk of harm from toxic substances. 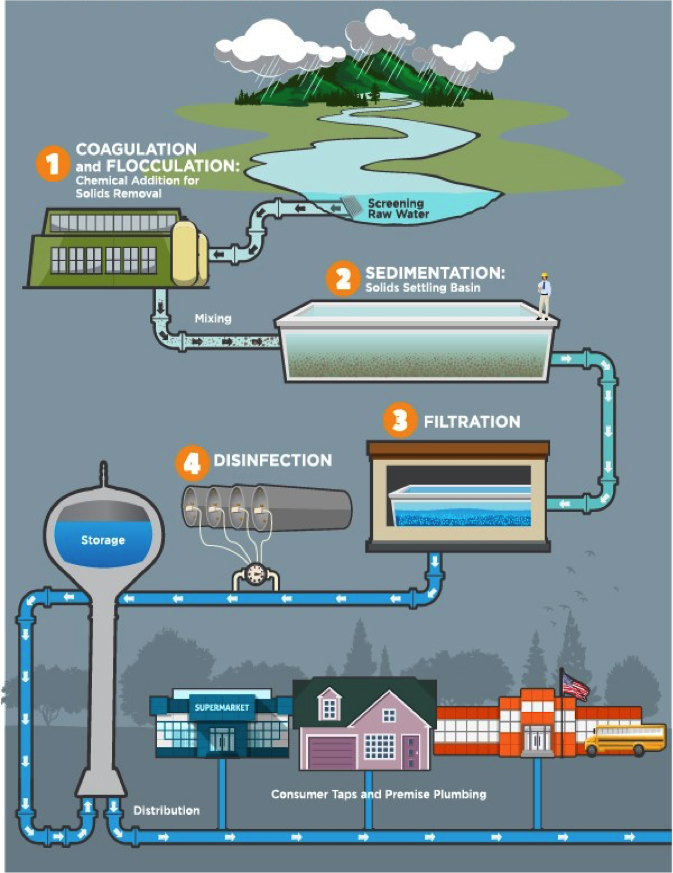 Conventional water treatment transforms raw surface and groundwater into finished drinking water that is biologically (disinfected) and chemically safe; other treatment objectives include low or no taste or odor, low levels of color and turbidity (cloudiness) and chemical stability (non-scaling and non-corrosive). The critical failure to provide adequate corrosion control was at the core of the highly publicized lead in drinking waterproblems plaguing Flint, Michigan. Generally, surface water presents a greater treatment challenge than groundwater, which is usually filtered naturally as it percolates through the earth and geological strata. Individual systems customize treatment to address the particular water quality and contamination characteristics of their raw water supply.

Although practices vary from facility to facility, there are four basic processes—as well as finished water distribution and storage—included in conventional surface water treatment and as illustrated in the figure.5

Although America’s drinking water remains among the safest in the world, it faces a growing array of increasingly costly challenges—particularly those related to aging infrastructure, including pipe system rehabilitation and drinking water treatment plant upgrades and expansion. Tackling these systemic problems will require realistic priorities and unprecedented collaboration among all levels of government, utilities and the private sector.

2 Roughly 15 percent of Americans, almost 45 million people, get all or part of their water from private wellsand are responsible for monitoring and maintaining the safety of their drinking water.