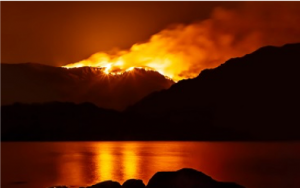 Americans consume over one billion glasses of drinking water each day from over 151,000 U.S. community water systems.1 But natural and man-made disasters, including wildfires, can impact the provision of safe drinking water. Thankfully rare, wildfires sometimes damage or destroy the treatment plants, storage tanks, pump stations, and pipes that are needed to provide drinking water to our homes, schools, and businesses.

The cost and duration of community efforts to recover from wildfires and other disasters are often magnified, and complicated in terms of liability, by expenses associated with providing safe drinking water for those who stay, return, and rebuild. Two recent and deadly wildfires in California continue to make the news, particularly with regard to infrastructure damage and drinking water contamination: the October 2017 “Tubbs fire” and November 2018 “Camp fire.”

Wildfires on the Rise

Extended droughts, higher temperatures, earlier snowmelts, and changes in precipitation, forest management, and land use patterns can all contribute to wildfire occurrence and intensity, which have increased in recent decades and are expected to continue. For example, at least 65 percent of the public water supply in the Western United States originates in or includes fire-prone areas. As wildfire frequency and intensity increases, so too does their potential impacts on affected watersheds and aquifers that serve as community and private drinking water sources.2 In general, the magnitude of the impact depends on the size and intensity of the fire, prevailing weather patterns, type of landscape/geography, and the nature and vegetation of the watershed or aquifer that provides the source water.

Potential impacts of wildfires include (1) reductions in water availability stemming from changes in the amount and timing of snowmelt and runoff from storms; (2) degraded surface and groundwater source quality from build-up of ash, soil erosion, and fire debris; (3) increased costs for community water systems to effectively treat and disinfect high-quality drinking water that meets all federal and state drinking water standards; and (4) changes in taste, color, and smell of source and treated drinking water, which can be substantial. Wildfires can also interrupt normal treatment and disinfection practices, while firefighting can result in substantial loss of water pressure, such as from electrical failures at pump stations. The latter can allow chemical and microbial pollution to enter the distribution system, or lead to stagnant, inadequately disinfected water lines that may need to be flushed. Wildfires often result in extended boil water notices and advisories. Minnesota’s Department of Health provides information for private well owners after a wildfire, such as the need to assess for loss of water pressure, have the well tested for contamination with bacteria, and to properly disinfect the system using chlorine (e.g., non-splashless and unscented household bleach).

Wildfires can also cause longer-term impacts on drinking water quality, but that are often difficult to predict. For example, some water quality problems might only appear during and after intense rainfall events in the fall/winter months. Burned land and forests near surface waters can deposit large amounts of hanging or dissolved materials like ash into downstream reservoirs and other drinking water sources, potentially leading to water intake damage, increased turbidity (water cloudiness), and changes in water chemistry such as increased dissolved organic carbon concentrations that can increase levels of disinfection byproducts. All of the above can lead to increased infrastructure and operating and maintenance costs for affected utilities that are typically passed on to customers.

Paradise and the 2018 Camp Fire

The 2018 Camp wildfire displaced and destroyed about 90% of the residents and buildings in the mountain town of Paradise, CA. Residents are now dealing with extensive contamination of up to 173 miles of drinking water mains and thousands of service lines with benzene and other volatile organic compounds (VOCs) from one or more unknown sources. Frequently, home owners are advised to boil their water to inactivate microorganisms when water quality issues such as loss of water pressure occur. However, the Paradise Irrigation District continues to provide bottled water to residents. The utility also warns that boiling tap water will not make it safe to drink because benzene releases easily from water to air, making inhalation exposure a potential concern. Butte County, home to Paradise, provides a set of guidelines for post-fire well safety and testing as well as chlorine disinfection for returning residents. The drinking water distribution system for Paradise was built using a variety of materials, including concrete, PVC, and ductile iron. Individual service lines, where the highest levels of contamination have been found, were mostly made of copper and high density polyethylene. The potential roles played by different pipe materials in Paradise’s drinking water contamination remain unclear.

One common yet unconfirmed theory is that the contamination occurred when first responders and residents fought the firestorms and depressurized the entire drinking water distribution system, creating a “vacuum effect” that sucked in VOCs and other combustion gases—not only from burned/melted pipes but also other building and natural materials. Some VOCs adsorbed into the walls of the pipes and later desorbed into the pipes and out opened taps. To fix its damaged water system and restore potable water service, the utility will take thousands of additional water samples, replace contaminated service lines, and flush contaminated mains at an estimated total cost of $53 million over several years. There are also innovative plans and partnerships in development to reduce the risk of catastrophic wildfire around essential drinking water supplies in the region by thinning the forest across public and private land. The Paradise drinking water restoration project represents a new chapter in U.S. community disaster recovery, and one that could be repeated as wildfire seasons lengthen and development in fire-prone areas expands.

An improved understanding of what happens to water distribution systems and household plumbing during and after wildfires will help inform and determine how to recover from these types of devastating events.

Steve Hubbs retired from water treatment operations at the Louisville Water Company in 2004. He remains an active volunteer in the drinking water community today. Heather Murphy joined the WQ&HC in early 2019 and brings over 15 years of international experience in water, sanitation, and hygiene. She is an Assistant Professor in the College of Public Health at Temple University in Philadelphia.

1A public water system (PWS) provides water to at least 15 service connections or serves an average of at least 25 people for at least 60 days a year. Over 50,000 PWSs are community water systems that supply water to the same population year-round. About 45 million Americans get some or all of their water from a private well and are responsible for monitoring, maintaining, and restoring the safety of their drinking water.