Water Structures on the Horizon

Elevated water storage tanks and water towers are a familiar sight in communities around the world. Nearly every water supply system in North America has an elevated storage tank visible somewhere on the horizon. Water towers, once essential, are vestiges of the first water supply systems of major cities. Many water towers are preserved as historical and architectural landmarks. This article will present examples of both types of water structures. 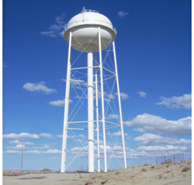 Water is stored in elevated water storage tanks to provide a reserve water supply in response to changing demand. The time water resides in an elevated tank can vary significantly from hour to hour and across seasons, such as in beach communities where drinking water demand is seasonal. On a summer day, water from storage tanks may be drained rapidly by day and recharged at night, when the demand declines.

The height of a water storage structure above the ground is designed to provide sufficient water pressure to deliver water to consumers, fight fires, and provide a reserve supply in the event that pumps fail due to an electrical outage. Elevated water tanks may double as proud advertisements for the chief products of a town, such as the one in the shape of a peach, known as the “peachoid” in Gaffney, South Carolina, the World’s Largest Catsup Bottle in Collinsville, Illinois or simply sport an unusual name for a town.

As convenient and useful as they are, elevated water storage structures present unique challenges in maintaining water quality over the course of prolonged storage. Regular inspection and maintenance of the water storage space as well as frequent monitoring of the water within it helps prevent water quality problems. For example, today’s water treatment engineers know that it is important to maintain a residual level of chlorine disinfectant in water storage tanks to help prevent the growth of pathogens in stored water. 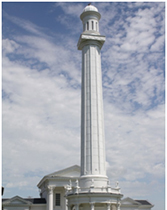 Water towers were used to regulate water pressure in the first urban water systems of the 19th Century. Water pressure surges have been eliminated by the use of centrifugal pumps, so water towers are no longer needed, but many have become treasured landmarks. My hometown of Louisville features a beautiful water tower that is a National Historic Landmark in Louisville Water Tower Park. The tower is part of Louisville’s Pumping Station No. 1, which was constructed between 1858 and 1860 on the banks of the Ohio River. In 1890 a tornado cut the tower in half, but it was rebuilt in the early 1900s (from: “Original Pumping Station & Water Tower: A Lesson in Imagination and Innovation,” courtesy Louisville Water). The tower has been dubbed “one of the finest examples of industrial architecture in the world,” and has become a point of reference for the people of Louisville. 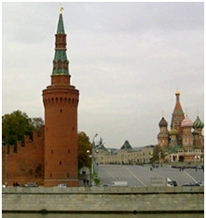 Moscow’s Vodovzvodnaya Tower is on the southwest corner of the Kremlin by the Moskva River. Moscow’s Kremlin and Red Square are a World Heritage Site.

In Moscow, the Kremlin’s southwest corner is formed by the stately Vodovzvodnaya (English translation: “water-supplying”) Tower. Built in 1488 as part of the Kremlin’s fortification system, a water-pumping machine was installed in 1633, not to regulate water pressure, but to deliver water from the Moskva River below through lead-coated pipes to palaces and the Kremlin Gardens (see: The Moscow Kremlin website). It was rebuilt after Napoleon’s army destroyed the tower in 1812; in 1937 it was furnished with a red star at its peak to mark the 20th anniversary of the 1917 Russian Revolution. 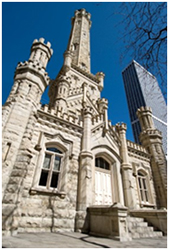 The city of Chicago sports the castle-like Chicago Water Tower, constructed between 1867 and 1869 on Michigan Avenue. According to a newspaper report from 1867, Chicagoans were thrilled that the water tower construction signaled better quality water; the tower was connected to a tunnel that took in water from two miles out into Lake Michigan. Alluding to “tiny silver minnows that wriggled through hydrants,” the paper noted, “Everyone will hail the announcement as being indeed tidings of great joy… their tea, coffee and other beverages will be no longer fishy” (See: The Chicago Tribune, March 25, 1867, “The Chicago Water Tower”). The tower regulated water pressure in the city and is famous, not only for its beauty, but for having survived the Great Fire of 1871 (See: View on Cities).

Water is essential to life. Evidence of the innovative storage and distribution of water for human survival can be found throughout the chronicles of history and even in your own hometown.

Steve Hubbs retired from water treatment operations at the Louisville Water Company in 2004. He was involved in the development of the first Drinking Water Disinfection Byproduct regulation in 1975-1979 and remains an active volunteer in the drinking water community today.