Water, Sanitation and the Millennium Development Goals: A Report Card on Global Progress 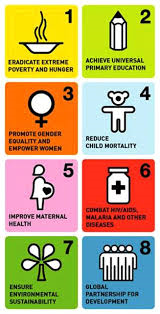 Graphic from UN Millennium Development Goals and Beyond 2015 website

In 2000, the United Nations adopted a set of eight Millennium Development Goals (MDGs) to improve the lives of the poorest people on Earth.  As the 15-year MDG timeline runs out, a final report on this ambitious program reflects both mixed success and overall optimism.  Given the importance of safe drinking water and sanitation to improving the human condition, we assessed two crucial MDG targets under MDG #7 (Ensure Environmental Sustainability) in the following “report card”.

Drinking Water:  Halve the proportion of the population without improved drinking water between 1990 and 2015

One hundred forty-seven countries1 have met the drinking water target, including nations in Eastern Asia, Latin America and the Caribbean, South-Eastern Asia, Southern Asia and Western Asia.  Sub-Saharan Africa did not achieve the drinking water target, but demonstrated a 20 percent gain in access to improved water sources. Worldwide, urban dwellers have better access (96%) to improved water sources than rural residents (84%).

Unfortunately, 663 million people still use unimproved drinking water sources; nearly half of these live in sub-Saharan Africa, while one-fifth live in South Asia.  Nevertheless, global progress has been excellent, and must continue. We assign a grade of “A” to progress toward this important global target.

Sanitation:  Halve the proportion of the population without sanitation between 1990 and 2015

Based on these statistics, we assign a grade of “C” to progress toward the sanitation target.  Further improvements in sanitation can produce profound results.  We note there is a significant benefit to drinking water quality from improved sanitation.  When human waste is properly channeled and treated, the risk of infecting drinking water sources is reduced.  Additionally, ending open defecation may reduce childhood malnutrition and stunted growth (see Poor Sanitation:  The Startling Link to Childhood Malnutrition).

Measuring progress against statistical goals is essential to prioritizing action.  As the MDG timeline expires, a new set of sustainable development goals for the UN Post-2015 Development Agenda is set to be adopted this September, with a new deadline of 2030.  Seventeen new, more specific, scientific and measureable goals will build upon the MDGs.  Goal #6 of the 17, is “Ensure availability and sustainable management of water and sanitation for all,” and includes targets covering topics such as water quality and open defecation. Indicators for the new targets will be set by March, 2016.  We think these could be as specific as measuring a chlorine residual in stored and delivered drinking water to help ensure safety.

We endorse the progress made to date to achieve the MDGs. We underscore the overarching value of clean drinking water and sanitation in improving human life on Earth and the need for further progress toward these critical global goals.