Water Experts Use Technology to Promote Safe Water and Sanitation

Controlling human exposure to waterborne pathogens associated with fecal waste is a key factor in attaining the goal of safe drinking water and sanitation for all, (Sustainable Development Goal #6 in the 2030 United Nations Agenda).  What does it take to make significant strides toward that lofty goal?  Try a group of nine international scientific teams focused on the challenge.   As part of the Global Water Pathogen Project (GWPP), led by UNESCO and Michigan State University, teams of scientists around the world are organizing to address key pathogen groups.  To that end, there are, for example, a “Virus Team,” a “Bacterial Pathogens Team,” and a “Protists Team.”  The “Sanitation and Disinfection Technologies Teams” will address the measures necessary to control these microbial disease-causing agents.

The GWPP involves over 110 experts from 41 countries in a grand effort to compile updated information on pathogens in sewage and water and the tools available to destroy them.  This is the largest coordinated effort of scientists to contribute to the 2030 agenda.  Benefiting from the technology revolution of the last two decades and harnessing the power of information technology, the accumulated knowledge will be freely available on an “open access integration platform.” The platform will be updated regularly by the experts and the information will also be published by UNESCO in a hardcopy format in English, French and Spanish.

Untreated or inadequately treated wastewater is a significant source of pathogens and disease when it is disposed of in the same body of water from which drinking water or irrigation water is withdrawn. These same waters are used for recreation as well as directly for hygiene—bathing and washing clothes—in many parts of the world.  In his 2013 book, The Chlorine Revolution:  Water Disinfection and the Fight to Save Lives, author Michael McGuire describes the sewer pipe-water pipe “death spiral,” as an all-too-common scenario in US urban centers prior to the routine chlorination of municipal drinking water in the early years of the 20th century.

Modern engineering and management practices have all but eliminated the sewer pipe-water pipe death spiral in developed countries, but that is not true in less developed nations, where waterborne illness still exacts a heavy toll in human life and suffering.  In amassing an impressive army of experts, supporters, and an effective communication platform, the GWPP aims to contribute to the great goal of safe water and sanitation for all.

A Product of Partnerships

Dr. Blanca Jimenez, Director of the Division of Water Sciences for UNESCO, and I conceived of the GWPP in 2014.  We both started our careers addressing the pathogens in fecal wastes, wastewater treatment for safe reuse and protection of surface waters. Thirty years later, we considered the tremendous volume of new information, including data on emerging pathogens and technologies, and we realized there was a need to update and compile the information and make it accessible.  This is a huge task, but it is something we are both passionate about.

Updating a Classic Reference Book
In 1983, the World Bank published a reference book by authors R.G. Feachem, D.J. Bradley, H. Garelick and D.D. Mara, titled “Sanitation and Disease: Health Aspects of Excreta and Wastewater Management.” Many a microbiologist or environmental engineer working on drinking water and sanitation issues owns a dog-eared copy of this classic. One of the main goals of the GWPP is to update “Feachem,” including adding listings of new and emerging pathogens. 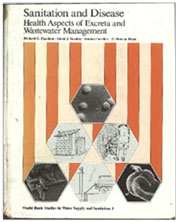 One of the objectives is to promote international academic-industry-government collaboration in the GWPP.  To that end, the GWPP is proud to say that we have gained support from the Gates Foundation and the Midland Research Institute for Value Chain Creation1.  We have also received generous support from P&G and the American Chemistry Council.  Furthermore, through UNESCO’s International Hydrological Programme, the only Intergovernmental Programme of Water Sciences in the United Nations, we are able to reach a number of governments and sensitize and mobilize them, especially developing States, the ones most vulnerable to the challenges being addressed.

It is only by working together that we will be able to tackle this immense and recalcitrant problem. As governments begin to examine the Sustainable Development Goals for Water and Sanitation, access to new knowledge and technology using modern tools of electronic communication will only enhance the investments made.

1This is a new partnership between Michigan State University and Dow Chemical and Dow Corning.