Recent Trends in Waterborne Disease Outbreaks in the US

Safe water is one of the marvelous hallmarks of life in the United States. To mark Drinking Water Week (May 3 – 9), we offer an overview of recent trends in the relatively rare occurrence of waterborne diseases in the US. 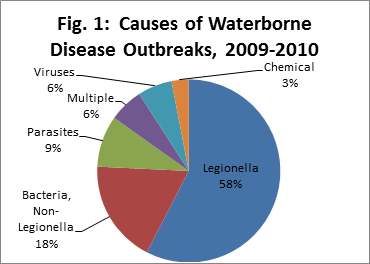 When waterborne outbreaks occur, US local and state health departments are obliged to report them to “WBDOSS,” the national Waterborne Disease and Outbreak Surveillance System.1  Since 1985, outbreak data have been compiled and published by the Centers for Disease Control and Prevention (CDC) in the “Morbidity and Mortality Weekly Report”2 (MMWR).

Public water systems serve over 286 million people in the US, according to CDC. These systems are subject to national drinking water standards and regulations set by the Environmental Protection Agency (EPA) under the Safe Drinking Water Act.  In contrast, owners of private wells—representing approximately 15% of the US population—are solely responsible for ensuring their water is safe from contaminants (see: Is Your Well Drinking Water all Well and Good?).  CDC outbreak data reflect deficiencies in both public and private water systems and, increasingly, in building plumbing systems; these data are used by EPA to help improve US drinking water quality.  Yet, it is important to recognize the limitations of MMWR data, including the fact that many cases of waterborne illness may occur sporadically, or as part of outbreaks that are never recognized.

The most recent statistics on US waterborne diseases are reported in a September 6, 2013 MMWR report for the two year period, 2009-2010.  That report noted 33 waterborne outbreaks in 17 states resulting in 1,040 illnesses, including 85 hospitalizations and nine deaths.  The direct causes of those illnesses are illustrated in Fig. 1. For the period 2009-2010, bacteria accounted for 76% (3 out of every 4) of all waterborne diseases, of which Legionella bacteria was the most common cause (58%). Non-Legionella bacteria accounted for 18%, while parasites (9%), “multiple causes” (6%), viruses (6%) and finally, chemical (3%) accounted for the remaining cases. 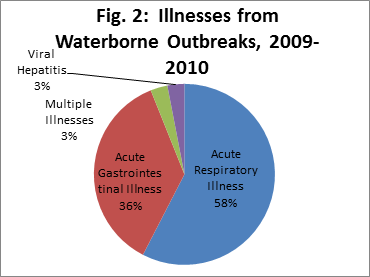 Illnesses resulting from 2009-2010 waterborne outbreaks are illustrated in Fig. 2.  Legionella may cause a form of pneumonia (Legionnaire’s Disease) or a milder form of a respiratory illness (Pontiac Fever), which explains the high percentage of “Acute Respiratory Illness” in Figure 2.  It is not a drinking water disease.  These illnesses can be contracted when people breathe in water mists or vapors contaminated with Legionella bacteria (see Addressing Legionella:  Public Health Enemy #1 in US Water Systems).  Many other waterborne bacteria can cause gastrointestinal illnesses when people drink contaminated water.  According to CDC, the number of waterborne outbreaks in the last three two-year reporting periods has not varied greatly,3 and Legionella was the most frequently reported cause, accounting for over half of them. About 47% of the Legionella outbreaks where there were connections to community water systems occurred in health care-long term care facilities and about 32% in hotels/motels.

The Story behind the Data 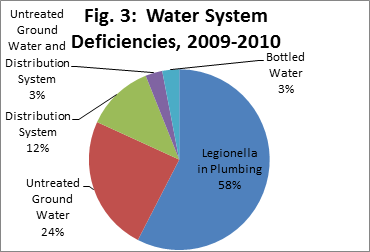 Figure 3 provides information on water system deficiencies associated with outbreaks in 2009-2010.  Outbreaks are assigned to one or more deficiency classifications based on available data.  In the case of outbreaks caused by Legionella, for example, Legionella bacteria were identified in plumbing systems.

Untreated groundwater was associated with nearly one-quarter of water system deficiencies during 2009 and 2010.   CDC states in its September 6, 2013 MMWR that full compliance with EPA’s Ground Water Rule could help reduce outbreaks among consumers of municipal drinking water of groundwater origin.  The rule targets public water systems using groundwater vulnerable to fecal contamination. CDC also notes that more public education and outreach may be needed to reduce outbreaks from private well systems, which are not subject to the Ground Water Rule.

Distribution system deficiencies were the third largest cause of outbreaks in 2009-2010; for example, three drinking water outbreaks occurred in systems supplying unchlorinated water. Two occurred as a result of cross-connections between potable (drinkable) water and non-potable water, as when wastewater backs up in pipes, mixing with and contaminating potable water.  CDC cites the importance of distribution system monitoring and adherence to guidelines to prevent these events.

Given inherent reporting limitations, it is difficult to calculate with confidence a percentage of the US population affected by waterborne outbreaks using MMWR data.  It is a credit to CDC, EPA, state and local health departments, and US water treatment facilities, however, that efforts are ongoing to both monitor and further reduce waterborne illness in the US.

1 Disease outbreak data are submitted to WBDOSS through an electronic reporting system known as “NORS,” the National Outbreak Reporting System.

3 There were, for example, 19 outbreaks associated with connections to community water systems during the period 2007-2008 and all were associated with inhalation of mists or vapors. It is the author’s opinion that growth –proliferation of Legionella in the hot water systems was the basic cause of the problem.