Can a Seattle Office Building Do without Chlorinated Water?

Can an ultra-green office building meet the “Living Building Challenge” (LBC) and bypass not only the energy grid but municipally treated drinking water?  That is the question being raised as the 50,000 square foot, six story Seattle Bullitt Center office building nears completion.  According to Time magazine (July 2, 2012), the building may be the largest multistory project to meet the strict requirements of the LBC, which is described as a “unified tool” advanced by the International Living Future Institute to “address development at all scales” and tackle critical environmental, social and economic problems (LBC description).

One goal of the LBC is “to harvest and purify rainwater to satisfy all the water needs of the building’s occupants, and to cleanse and return used water to the hydrological cycle in an undiminished condition,” notes the Bullitt Center website.  Initially, the building will be connected to Seattle’s water supply system to provide potable water for water fountains, sinks, showers and fire safety systems.  Water treated onsite will only be used for flushing composting toilets, requiring only about one tablespoon of water (to create a “soap-foam transport medium” for human waste).  Once the State Department of Health and Seattle Public Utilities have given it the OK, the system is designed to convert to using treated rainwater harvested on the roof as the sole source for potable water,” according to the Center website.

The Puget Sound Business Journal reported  June 1 that eventually the Bullitt Center will collect and treat rainwater in a 56,000-gallon cistern in the basement. The foundation wants to filter the collected rainwater through a lower-level green roof and a strip of grass.  The plan may be to use ozone or ultraviolet radiation to treat the water, but no chlorine. That’s where LBC standards clash with Environmental Protection Agency (EPA) requirements:  The federal government requires a residual level of chlorine in treated water.  However, under the LBC, chlorine is a “Red List” chemical, which means it cannot be used in the building.  The Bullitt Center website declares the LBC “will provide an exemption to use City water when required by the municipality, but it will not grant an exemption to use chlorine to treat rainwater.”

The Devil is in the Details

Whether or not this project is successful depends on numerous design elements:

The only LBC Red List I could find online is the one pasted below, which does not list chlorine per se, but does list certain chlorinated compounds.  Is the chlorine ban based on its presence in compounds with other chemical elements in the form of chlorinated compounds?  Chlorine is not listed as a separate banned substance. 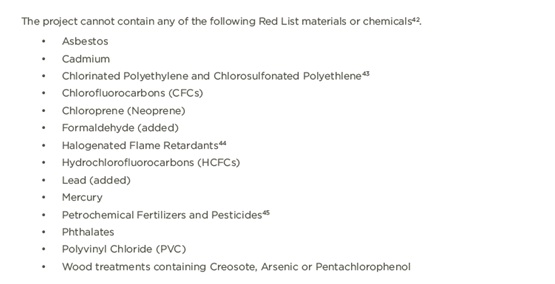 Why chlorine is needed, even at the Bullitt Center

There is good reason for the US federal government to require a residual level of chlorine disinfectant in drinking water. Chlorine and chlorine-based disinfectants remain in water after being applied, destroying waterborne pathogens that could spread disease.  Waterborne pathogens sickened and killed thousands of US residents every year before chlorine treatment was widely adopted in the early years of the Twentieth Century.  The 1974 Safe Drinking Water Act requires EPA to regulate residual disinfectant in drinking water to levels at which no adverse health effects are likely to occur.  EPA has set the maximum residual level of chlorine in municipal drinking water at four  parts per million but the residual commonly ranges between 0.5 and 1.0 ppm at the tap; the chlorine residual guards against the reintroduction of germs in drinking water as water is conveyed from the point of treatment to the consumer tap (see Basic Information about Disinfectants in Drinking Water:  Chloramine, Chlorine and Chlorine Dioxide).

In a small closed system such as an office building where water travels over a short distance, there may be only a low risk of microbial re-contamination.  Perhaps ozone can provide that residual protection. However, ozone is short-lived as a residual and if water sits in pipes during quiet periods, over long weekends, for example, the risk of re-contamination may rise.  This opens the possibility of bacterial growth in drinking water fixtures. The devil is in the details, of course, but pending satisfactory answers to design questions raised here, perhaps the LBC should reconsider its decision to prohibit a safe level of chlorine in office workers’ drinking water.  It’s a precautionary measure that makes sense.

Fred Reiff, P.E., is a retired official from both the Pan American Health Organization and the U.S. Public Health Service, and currently lives in Reno, Nevada.