Safe Drinking Water: Still at the Core of Sustainable Development

In June, 2012, representatives of world governments and civil society gathered in Rio de Janeiro for the third United Nations Conference on Sustainable Development.  The conference, known as “Rio+20,” was held two decades after the inaugural 1992 “Earth Summit” in the same city, and ten years after the 2002 World Summit on Sustainable Development in Johannesburg. The goals of global access to safe water and sanitation were among the topics addressed in one of the most important documents resulting from the conference, known as “The Future We Want.”  The document underscores “the critical importance of water and sanitation within the three dimensions [(economic, social and environmental)] of sustainable development.” 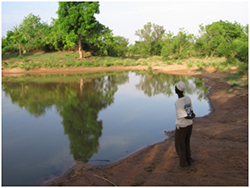 Prior to 2008, this lake was a source of water for a village in Ghana. In 2008 protected bore wells were constructed by a partnership of non-government organizations, dramatically improving drinking water quality for villagers.

Discussions at the 2012 conference measured progress toward the eight Millennium Development Goals (MDGs).  These goals follow from the 2000 United Nations Millennium Declaration, which committed nations to a new global partnership to reduce extreme poverty and achieve critical benchmarks by 2015. One of these benchmarks–halving by 2015 the fraction of the world population that lacked sustainable access to safe drinking water in 1990—was achieved in 2010, five years ahead of schedule.  Meeting this benchmark early is a significant public health achievement:  Since 1990, over two billion people have gained access to improved drinking water sources. Access to safe drinking water positively impacts most of the eight MDGs, including ending poverty and hunger, universal education, gender equality, child health, maternal health and environmental sustainability.

It is impossible to speak about sustainable development without addressing access to life-sustaining clean water. “The Future We Want” reaffirms the MDGs, adding new goals:

Highlighting the need for international assistance and cooperation to achieve these new goals, the United Nations has declared 2013 the International Year of Water Cooperation. This year successful water cooperation initiatives will be highlighted and critical issues addressed. In short, look for more context and greater detail around the noble mission to supply safe water to all.