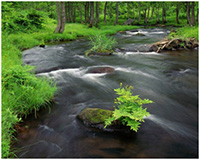 In the US, as in many other developed countries of the world, we have done such a good job of ensuring a healthful drinking water supply that many of us fail to appreciate this ever-present benefit. Every day the men and women “upstream” of our taps apply technologies that transform raw water into palatable, pathogen-free H2O. In-plant treatment includes physical removal of solids, disinfection, and taste and odor control. But there is another significant step toward good water quality that may be even less appreciated by the public. That step takes place well before water enters the treatment plant—protecting the watershed.

Every drop of rain and melted snowflake that falls to the ground wends its way, by the constant pull of gravity, into the vast interconnected system of Earth’s ground- and surface waters. Precipitation ultimately collects into geographic regions known as watersheds, the shapes of which are determined by the local topography. It is from watersheds that we ultimately derive the raw water that becomes our drinking water, either from streams and lakes, or wells tapping groundwater aquifers. The forests, stream borders and wetlands of watersheds serve as natural filters for many contaminants; they also help preserve water quantity. Protecting watersheds reduces erosion and sediment build-up in streams.

Urban development and agricultural land use are risk factors for degraded raw water quality.  A study in the American Water Works Association Journal (January, 2013) notes dissolved nutrients such as nitrogen and phosphorus in streams increase with increasing development in watersheds; further, nutrient levels increase during storm events due to sources in the landscape and within channel bed sediments. Nutrients in raw water are problematic because they can spur algal growth, which can lead to drinking water taste and odor problems and the production of disinfection byproducts (remember that organic materials that enter watersheds must be removed by treatment [including chlorination], which can result in byproducts).

In addition to its public health benefits, watershed protection can lower water treatment and capital costs.  A 2004 article in the American Water Works Association journal, Opflow, reported that for every 10 percent increase in forest cover in a source area, treatment and chemical costs decreased approximately 20 percent (that’s 200% return on investment!).

The Opflow article cited above lists two principles the authors say were taken for granted a century ago:

These simple principles speak volumes about the logic of designating and protecting watershed areas: the very first step in achieving clean drinking water.

Bruce Bernard, PhD, is President of SRA Consulting, Inc. and Associate Editor of the International Journal of Toxicology.