Meeting the Goal of Safe Drinking Water and Sanitation for All

Reliable and safe drinking water and sanitation are 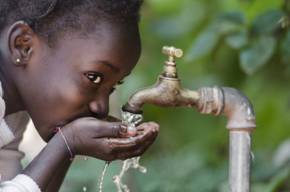 fundamental requirements of people trying to reach their greatest potential in life. Few of us can relate to the burden and indignity of living without these basic services. Achieving universal access to safely managed drinking water and sanitation services is one of the 17 Post-2015 Sustainable Development Goals (“SDG” #6) that form the core of the United Nations 2030 Agenda for Sustainable Development.

The SDGs build on 15 years of progress made under the earlier eight Millennium Development Goals (“MDGs”) from 2000 to 2015. On the first of January, 2016, the MDG timeline officially ended and the SDG timeline began. How do MDGs and SDGs differ? While both are “people-focused,” SDGs are more specific and measurable than the MDGs and promise to “leave no one behind.” This article explores the progress already made under the MDGs and the work yet needed to achieve universal access to safely managed drinking water and sanitation services for all.

Progress toward achieving sustainability goals is measured using indicators associated with each SDG. Under the MDGs, the drinking water indicator focused on people around the globe gaining access to improved sources of drinking water. “Improved sources”—such as new wells—are those that are constructed to protect water from outside contamination, including wastewater. Under the SDGs, the indicator increases in complexity by including quantitative measures of water quality. For example, a handbook published jointly by the World Health Organization and the United Nations International Children’s Emergency Fund (UNICEF) recommends checking water for a chlorine level of at least 0.2 mg/L when evaluating disinfected water supplies in households or treatment facilities. One cannot confirm that water from an improved source is disinfected unless this type of more sophisticated testing is done.

Chlorine is an obvious candidate for a water quality indicator because it kills most waterborne pathogens and continues to disinfect long after its addition—a crucial attribute for communities that distribute or store water. Furthermore, chlorine levels can be measured simply using disposable paper test strips. Thus, the appropriate and controlled use can be monitored.

Progress Made under the Millennium Development Goals

Given the mixed success of the MDGs and a much more ambitious set of SDGs, the next 15 years will prove an interesting time. The UN’s new High Level Panel on Water, convened by the UN Secretary General and the World Bank President, has been tasked with helping to achieve the daunting goal of universal safely managed drinking water and sanitation along with other targets, such as those related to water scarcity. The UN Panel promises to use a “comprehensive and coordinated approach to water, as well as increased attention and investment in water-related services.”

On this planet, water is life but water quality is health. Getting to universal safely managed water and sanitation for all is a daunting challenge, but it will pay big dividends.

Joan Rose, PhD, is the Homer Nowlin Chair in Water Research at Michigan State University, the 2016 recipient of the Stockholm Water Prize, and a member of the Water Quality and Health Council.