Keeping the Lead out of Drinking Water 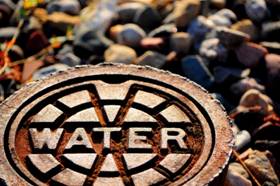 The recent lead in drinking water crisis in Flint, Michigan raises questions about the role of water distribution infrastructure in altering the quality of water delivered to consumers.  In Flint, lead was leached from the water distribution system after the city changed from the Detroit Water System, which takes water from Lake Huron, to the Flint River.  Reports say this change probably increased the water’s corrosivity enough to dissolve lead from lead components that still remain in the aging infrastructure.

What is EPA Doing?

Lead has been banned in US drinking water infrastructure since 1986, but it is still present in the joints of old cast iron pipes, lead service lines, and the indoor plumbing of old homes, brass fittings, and lead-based solder used on copper pipes.1  The US Environmental Protection Agency’s (EPA’s) 1991 Lead and Copper Rule mandates water systems implement measures to control the corrosivity of drinking water when lead exceeds the “action level” of 15 parts per billion in more than 10 percent of tap water samples.2

A working group of EPA’s National Drinking Water Advisory Committee (NDWAC) to which I belonged developed recommendations for revisions to the Lead and Copper Rule that will further protect public health by:

The recommendations were forwarded by the NDWAC to EPA for consideration in an August, 2015  report.   The Rule revisions are expected to be finalized in 2017.

The Example of Washington, D.C.

Lead contamination issues can arise from a variety of water system changes.  In 2000, water treatment officials in Washington, DC switched their water disinfection method from chlorine to chloramine.  The change in treatment was made in an attempt to control disinfection byproducts (DBPs), which are unwanted products of a chemical reaction between disinfectant and naturally occurring organic matter in raw water.

No water disinfectants contain lead, and both chlorine and chloramine treatment are EPA-approved methods used safely for many decades to help destroy waterborne pathogens in drinking water.  However, these two disinfectants interact differently with metal water infrastructure. Chloramine may require additional corrosion control measures compared to chlorine treatment in order to keep lead in pipes and fittings from leaching into the water, as the Washington, DC experience showed.  Other more subtle changes in water chemistry may also play a role.

EPA’s 2006 “Stage 2 DBP Rule” mandates tighter control of DBPs, prompting Washington, DC and many other water systems to convert to chloramine treatment, which is known to form lower levels of regulated DBPs.  An unintended consequence of the switch, however, was a rise in lead levels in city water, up to 85 times the 15 ppb lead action level. The DC lead crisis precipitated lawsuits, hearings and corrective action.  Fast-forward to today: corrosion control measures are successfully keeping the lead concentration below the action level in DC water.

Providing clean water to consumers is one of the most basic public health responsibilities of municipalities.  Scientists and engineers have a good understanding of lead contamination in drinking water and its sources.  However, they are still learning about what triggers its release into household plumbing.  Using this knowledge to reduce public exposure to lead is one of the most important challenges before water treatment operators today.  As the CEO of the American Water Works Association stated in a January 19 press release, “…water chemistry is complex. When a community changes water sources or water treatment, unintended consequences can occur. Water systems must be alert to these potential issues and have plans in place to address them.”  I agree, and add to the list of parties that must stay on the alert:  politicians, health officials, decision makers and community and environmental watchdog groups.  It’s important for avoiding another “Flint.”

Consumer Tips: Lead in Your Tap Water?
Lead has no taste or smell. According to the US Centers for Disease Control and Prevention (CDC), the only way to know whether tap water has lead in it is to have it tested. If you are served by a public water system, you can check with your provider for data on lead levels. Children and pregnant women are especially vulnerable to the effects of lead exposure.

CDC lists practical tips for reducing your lead intake if levels are a concern. These include letting water run before using it and only drinking, cooking or making baby formula with water from the cold tap as warm or hot water from the tap can contain higher lead levels. For a complete list of tips, please see this CDC web page.

1 US Bureau of Reclamation, Technical Memorandum No. MERL-2013-57, Effect of Chlorine vs. Chloramine Treatment Techniques on Materials on Materials Degradation in Reclamation Infrastructure, Sept., 2013.
2 The action level for lead applies only to the first draw water that has been stagnant for at least six hours.