Hydration and Hyponatremia: Can You Drink Too Much Water? 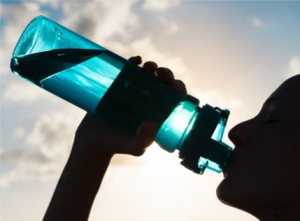 As much of the United States swelters in the midst of a very hot summer (even in northern Minnesota), it seemed again like a good idea to write about the importance of hydration. After all, humans are carbon- and water-based organisms. My previous perspective focused on staying hydrated year-round, but this article addresses some of the current science and persistent misconceptions about hot weather- and exercise-associated dehydration and over-hydration, called hyponatremia. (So yes, you can drink too much water). Although both conditions can be serious, for most of us most of the time, drinking the right amount of water is not that difficult—even during vigorous exercise and in hot and humid conditions. The key is simply to “drink to quench thirst,” but as I noted in my previous article, thirst may become less effective an indicator as we age.

Water is the most important nutrient in the body, but proper hydration mostly comes down to blood sodium concentrations. Most bodily sodium comes from salt (NaCl) in foods, and most foods contain at least some water. (A much debated question is “How much salt do you actually need?”) Sodium is the most important electrolyte1 and balances fluids in and around your cells and tissues. Your body’s heat regulation processes increase blood flow to the skin, where excess heat is released to the environment through sweat, radiation, or convection. But let’s stick with sweat (pun intended), which is the primary mode of heat regulation associated with exercise, excessive clothing, or high heat and humidity (and which varies by person, combination, and circumstance). Excessive sweating, and a host of other conditions such as diarrhea or vomiting, can lead to dehydration (also called hypernatremia) when your body doesn’t have as much water as it needs. However, I’d like to focus the rest of this article on the much rarer and less well-known, but potentially more dangerous, condition of hyponatremia (i.e., low blood sodium concentration).

Drinking too much water too fast, also referred to as “water intoxication,” causes an imbalance in sodium and other electrolytes, and water moves from your blood to inside your cells, making them swell. This type of swelling, particularly inside the brain, is serious and requires immediate medical treatment. The warning signs of hyponatremia look a lot like the symptoms of dehydration, heatstroke, and exhaustion and include headache, confusion, diarrhea, nausea, and vomiting. In addition to dehydration, a recent article claims that long-distance (e.g., marathon) runners are prone to over-hydration—drinking more than 1.5 L per hour—especially in hot and humid conditions, which can be fatal. Those particularly at risk include females and endurance runners of smaller height and bulkier builds who run slowly, but drink excessive amounts of water. Exercise-associated hyponatremia (EAH) is the term used for people who have low blood sodium levels and water weight gain during or immediately after high-intensity exercise and training. Although deaths by EAH are exceedingly rare, the condition has been the focus of several international expert panel reviews of its prevalence, diagnosis, and treatment and prevention.

So How Much Water Should You Drink?

It’s almost a mantra: Be sure to drink lots of water and stay hydrated! But how much is enough? As noted above, in extreme EAH conditions, it is possible to achieve water intoxication. Several widespread misconceptions have been particularly tenacious regarding daily water consumption recommendations. One particularly persistent health myth is that adults should drink eight 8-oz glasses (about ½ gallon or 2 L) of water each day, which has no science behind it. An absurd, dangerous, and widely discredited daily water consumption recommendation advocated by a high-profile U.S. athlete is to divide their weight by two and then drink that many ounces of water over the day!

Similarly, there seems to be an established, often Internet- and social media-driven culture of over-hydration for athletes before and during even moderate intensity activities, including “drink as much fluid as possible” to avoid fatigue, cramps, and “under-performance.” One humorous, but informative, video addresses various long-standing hydration misconceptions and their origins. A 2016 review of the quality of information then available on the Internet regarding hydration recommendations during exercise found that the quality of information was overwhelmingly poor, even for those sites that could be considered medical or scientific.2 For example, less than half of the reviewed websites even mentioned the potential risks hyponatremia from over-hydration. When it comes to avoiding EAH, here’s what the experts say3:

Drink according to thirst. Because fluid losses through sweat and urine are highly dynamic and variable across individuals participating in a variety of outdoor activities, recommending fixed ranges of fluid intake is not appropriate…Following thirst as a real-time guide appears safe and effective.

The above advice is largely aligned with 2013 exercise and fluid replacement general principles provided by the American College of Sports Medicine. Moreover, they also hold for daily water consumption. There is no universally accepted, health-based recommendation for a daily amount of water people need, which will differ daily by what they eat, where they live, and what they are doing, like working in an air-conditioned office versus going for a summer run.

Although it is possible to drink too much water, when it comes to proper hydration, the human body has a highly sensitive, built-in gauge: Drink to quench thirst, but not beyond.

1Electrolytes are dissolved minerals in blood and other body fluids that carry a positive or negative electric charge and conduct electricity. Particularly important examples include sodium, chloride, and potassium. Proper balance of sodium and other electrolytes is vital because they also affect many other bodily and cellular processes.