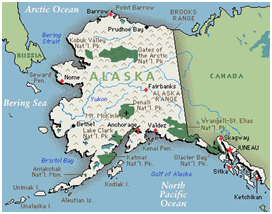 Today almost all Alaska Native villages have treated drinking water supplies available for the residents by means of piped distribution systems and/or watering points from which the treated water can be hauled to the homes not connected to the distribution systems.  Many of these facilities were installed by the U.S. Public Health Service between 1960 and 1987.  The Alaska Department of Environmental Conservation also began construction of water treatment and distribution facilities in the mid 1970s.  Various Alaska Native organizations and entities are currently responsible for their operation, maintenance, repair, replacement, improvement and expansion. The treatment processes that are utilized vary greatly because the physical, chemical, and biological characteristics of the water sources are divergent and frequently unique.  Some, such as in Barrow, Alaska, are state of the art.

Contrary to common belief, the raw water in Alaska often contains pathogens or substances that can be harmful to human health.   Nevertheless some of the Alaska Native households, especially those that are not connected to a distribution system, prefer to obtain their drinking water from streams, ponds, snowmelt, ice melt, runoff from precipitation and other potentially contaminated natural sources.

Comments on the presence in drinking water of chemicals merged frequently with comments on taste and negative health effects.  Chlorine and iron in treated water were cited as distasteful while untreated rain and river water was described as “crisp,” “clean,” “sweet,” and “fresh.”  Frequently cited health concerns associated with treated water were “gastrointestinal problems experienced by young children, older residents, and honored Elders.” In several cases, respondents highlighted “faulty operations and maintenance” for the taste and smell of chlorine, the color associated with iron, and potential health problems.

Access to water was a reason cited by 17 percent of respondents as a reason to avoid treated water.  Comments include: “No transportation to haul [treated] water,” or “[Rain] is right outside.”  Older residents referred to tradition as a reason for relying on untreated water.  Finally, cost was cited as a deciding factor by residents of two of the study communities in which a fee is charged for treated water.

The researchers’ recommendations for promoting greater use of treated water are based on a “social-ecological framework” that takes into account family, community and policy.  Such an approach, according to the authors, “acknowledges the importance of the environment in shaping individual behavior.” The researchers’ recommendations are summarized below:

Although no waterborne illness statistics for the study communities are offered by the researchers, there is little doubt that consuming untreated drinking water does present health risks, particularly to the young, the elderly and the immuno-compromised.  The researchers have done an exemplary job of documenting the reasons why some Alaska Native people choose to drink untreated water.  Their recommendations for promoting treated water use are logical and should be seriously considered.  Furthermore, the researchers note their findings corroborate other studies conducted both in and out of Alaska.  As such, their systematic methodology has exciting potential to promote greater public health awareness in communities underutilizing treated water.