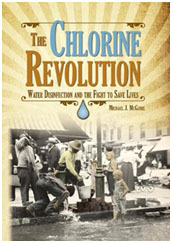 A new monument in Patterson, New Jersey’s Cedar Lawn Cemetery marks the burial site of a pivotal figure in modern public health history.  It is a tribute to physician Dr. John L. Leal, who over a century ago took the first bold step of adding a chemical disinfectant to a municipal water supply.  Leal’s actions launched a historic battle in the war on waterborne disease, changing US public health forever.  As city after city adopted drinking water disinfection, typhoid fever rates plummeted, and our collective psyche was positioned to accept the safety of drinking water as a fact of life.  Environmental Engineer Michael J. McGuire chronicles this historical breakthrough in his book, “The Chlorine Revolution:  Water Disinfection and the Fight to Save Lives”.

On September 26, 1908 Dr. Leal began adding miniscule levels of “chloride of lime” solution to the public water supply of Jersey City, New Jersey, a drastic action for that time, given widespread aversion to chemicals.  The sanitary engineering literature by this time had described a wide range of potential disinfectants, including chlorine, ozone, UV, bromine, iodine, copper and heat, and documented a few cases of the successful use of chlorine in Europe1.  McGuire notes, however, “Chemophobia, the fear of chemicals, was prevalent at the turn of the twentieth century and continues to be an issue.” As the story unfolds, McGuire relates how “Chemophobia almost derailed the use of chemical disinfectants then, and it often dominates discussions of drinking water safety today.”

As a health officer for the city of Patterson and sanitary advisor to the Jersey City Water Supply Company, Leal was obsessed with protecting public health and improving water quality. As a physician, he understood the importance of breaking the sewer pipe-water pipe “death spiral:”  that wastewater disposed of in the same water body that was used for drinking water only recycled waterborne pathogens through human hosts.  Leal patrolled the Passaic River watershed, “moving overhanging privies and cesspools back from the river bank.”  McGuire offers the very plausible explanation that Leal’s passion for drinking water safety could be traced to his father’s long and fatal struggle with dysentery, contracted while the elder Leal served as surgeon for the Union Army’s 144th Regiment in the Civil War.

Chlorination was an outcome of a legal challenge by the city over the quality of water supplied to residents through a new municipal water system constructed by the Jersey City Water Supply Company. A series of court trials pitted city officials against the company from 1906 to 1908.  In 1908, the company was granted a 90 day window to present “other plans or devices” as an alternative to constructing sanitary sewers in an effort to provide water that is “pure and wholesome”.  Leal argued that constructing sewers would be ineffective in reducing what today is known as “nonpoint” pollution:  impurities that flow into water bodies entrained in precipitation runoff.  Instead, Leal enlisted the aid of the great sanitary engineer, George Warren Fuller, to construct a water chlorination system.  Once implemented, the public health results spoke volumes.  Chlorination technology spread quickly after Leal, Fuller and a third colleague presented their results at a 1909 meeting of the American Water Works Association.  The Jersey City death rate fell from approximately 20 per 100,000 people in 1905 to low single digits by 1920.  By 1914, 53 percent of all people served by US public water supply systems were consuming chlorinated water. The typhoid fever death rate fell to less than one per 100,000 in 1941, the year that public health historians confirm the conquest of waterborne disease in the United States.

A Contribution to Public Health History

Michael McGuire has performed a lasting service by detailing the events leading to the first use of chlorine to help sanitize drinking water.  In titling his work “The Chlorine Revolution”, McGuire does not exaggerate that historical development.  In some cities, water filtration—the physical removal of particulate matter from drinking water—was already lowering bacteria levels in drinking water in 1908,  but it was not enough. Filtration helps remove bacteria adhering to larger sized particles; free-floating bacteria, however, were still passing through filters. It took the addition of less than one part per million of chlorine2 to municipal drinking water supplies to deal the final blow to waterborne typhoid fever.

Chlorination destroys most bacteria in water, and in so doing helps ensure the safety of our most vital resource. McGuire quotes a New York City Health Department employee who admitted in 1926, “Until lately all of us felt ashamed of our typhoid death rate.”  According to a 2010 study, life expectancy in developed countries has increased from less than 50 years in 1900 to nearly 80 years today, thanks in large part to the availability of clean water and rapid declines in infectious disease, in addition to other factors such as economic growth, rising living standards and improved nutrition.

In chronicling the US drinking water chlorination story, McGuire also highlights the quiet courage of a turn-of-the-century New Jersey physician who demonstrated the success of chlorine chemistry over an ancient scourge.  It should come as no surprise, therefore, that in planning the Leal monument on the previously bare burial ground in Cedar Lawn Cemetery, McGuire chose the apt and long-due inscription “Hero of Public Health.”

1Examples include:  adding chloride of lime solution to the reservoir and water mains serving Maidstone, England in 1897 to halt a typhoid fever epidemic; and adding ferrochlore (a mixture of an iron salt coagulant and chloride of lime) to the water supply of the resort town of Middelkerke, Belgium in 1902.  The latter example is considered the first continuous use of chlorine in a water supply anywhere in the world.  The first continuous use of chlorine in a US water supply system occurred six years later in 1908 in Jersey City, New Jersey.
2This concentration refers to “free chlorine,” the term used to describe the combined levels of hypochlorous acid and hypochlorite ion, which form when chlorine-based disinfectants are added to water.