Honduras is located in Central America and faces many of the challenges typical of developing countries.  A survey of 30 Honduran communities conducted by Water for People in 2006 indicated that although chlorination of community water supplies is required in Honduras, only one of the 30 communities was in fact chlorinating.  The reasons provided by community leaders for not using chlorine were as diverse as the communities themselves, ranging from bad taste and odor to cost. 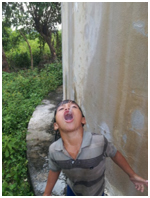 Honduran child enjoys a drink of clean, chlorinated water made possible by Engineers without Borders, Water for People, and others

Most Honduran communities feature either gravity fed spring systems or pumped groundwater systems.  Pumped groundwater systems typically work on a “schedule” where water is provided to neighborhoods every other day for several hours.  This allows pilas (water basins equipped with wash stands) to be filled with enough water to last two or three days.  But routinely depressurizing water lines greatly increases the risk of contamination.  The open pilas are also subject to contamination from routine use. The water system in Santiago is typical of many pumped Honduran systems where water is provided on a schedule to open pilas.

In 2012 the Missouri University Science and Technology (MS&T) Engineers Without Borders (EWB) student chapter provided a well for the community of Santiago, Honduras (population approximately 8,000).  The community was encouraged to proceed with chlorinating the well, as it was deemed infeasible to operate the distribution system pressurized on a 24/7 basis, and samples of the system indicated the presence of E.coli bacteria.  The alcade (regional mayor), a public health physician, agreed to explore the possibility of chlorination, but noted the challenges of community acceptance, based on prior experience.

In April 2013 a team of four engineers conducted lab tests to evaluate the chlorine demand and taste and odor of a chlorinated water supply for Santiago. They presented results to members of the community water committee and the committee was then invited to participate in a blind taste and odor evaluation.  The committee unanimously and enthusiastically endorsed the first phase of the project to chlorinate one of the three wells serving approximately one-third of the community.

In August 2013 a group of 14 EWB students and two mentors traveled to Santiago to construct the chlorination system; collect and analyze 120 bacteriology samples (before and after chlorination); conduct surveys of community residents regarding household health and water usage; conduct a leak survey; survey paths for future water lines; install 8 residential water meters; and instruct schoolchildren in grades one through six on the importance of safe water and hand-washing.  It was a busy 2 weeks!

Results of the water quality samples prior to chlorination indicated that water from the wells was free of fecal contamination, but that most water samples collected at taps were contaminated.  Contamination in the pilas was worse than in the taps serving the pilas, indicating further contamination as water sat in the pilas.  After chlorination was initiated, all samples from the chlorinated portion of the distribution system were free of total coliform bacteria and E.coli.  Chlorine levels were initially set at 1.5 mg/l at the tap and were reduced to approximately 1.0 mg/l after the third day of chlorinating.  The chlorine feed pump was tied directly to the well pump motor, and thus fed chlorine at a constant rate whenever the pump was running.  Chlorine residuals in the distribution system were remarkably consistent, ranging from 1.4 to 1.6 mg/l over the initial 3 day period of monitoring.  Data from the non-chlorinated portion of the system indicated continued contamination with E.coli.

Special thanks to Water for People (2006 and 2010 projects), Engineers Without Borders (annual projects in Santiago since 2009), Grundfos (donated the chlorine metering pump), IDEXX (donated all materials needed to set up a Colilert microbiology lab), and the people of Santiago for being willing to give chlorination another try!