As 2017 came to a close and 2018 began, a growing health fad was reported throughout the news and social media: Americans paying top-dollar to drink bottled “raw” water from a spring. Whether for purported health benefits or a misguided effort to get off the “drinking water grid,” as chair of the Water Quality & Health Council, I felt it imperative to address the very real risks of drinking untreated water. 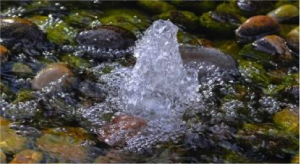 What Is Raw Water?

As you may have already guessed, “raw” water is untreated, unfiltered, and unsterilized (non-disinfected) in this case spring water that is being increasingly bottled, marketed, and sold as-is for drinking in affluent pockets of the United States.1 In addition to containing unknown and potentially unsafe levels of “naturally occurring” minerals like arsenic, raw water likely contains an unknown level of microorganisms such as bacteria, viruses, fungi, and protozoa—many of which can make you sick (here are some helpful “germ terms”). Indeed, the presence of “beneficial (probiotic) bacteria” is a key selling point for raw water, which is also called “live” or “unprocessed” water.2

Is It Safe to Drink?

Exorbitant pricing aside, Americans should not intentionally drink raw water that is potentially “alive” with germs. For perspective, according to a recent World Health Organization (WHO) Fact Sheet, at least two billion people use a drinking water source contaminated with feces, which can transmit diseases such diarrhea, cholera, dysentery and polio—particularly to children. In fact, the WHO estimates contaminated drinking water causes at least 502,000 diarrheal deaths each year.

But the public health risks of drinking untreated, contaminated water are not just a problem for developing nations. We have written about New Zealand’s Largest Drinking Water Outbreak, which sickened over 5,000 (one-third of) residents of a town that relied on untreated groundwater that became contaminated from sheep feces after heavy spring rains. An estimated 15 million households in the US rely on private wells for their drinking water. Because they are not regulated by the US Environmental Protection Agency (EPA), responsibility for private well maintenance and protection from contamination, including annual testing and periodic treatment, rests with the homeowner.3

Despite unsupported claims that raw water is a natural and safer alternative for those wary of disinfected and fluoridated tap water, let me be absolutely clear—drinking contaminated raw water can make you sick. And in the United States, where over 300 million Americans have community access to regulated, finished drinking (tap) water from both surface (e.g., lakes, rivers) and groundwater sources, it can be a ludicrously expensive and totally unnecessary risk. This is especially poignant considering research shows that once implemented in the early years of the twentieth century, drinking water treatment led to significant improvements in US public health. In fact, according to Life magazine, “The filtration of drinking water plus the use of chlorine is probably the most significant public health advancement of the millennium.”4

It is particularly alarming that the growing popularity of raw water is closely associated with an off-grid water movement (also called the “water-consciousness movement”) away from the protection of EPA and FDA regulations. As noted in the New York Times article, the movement “has become more than the fringe phenomenon it once was, with sophisticated marketing, cultural cachet, millions of dollars in funding and influential supporters from Silicon Valley.” Fortunately, I’m not alone in highlighting the dangers of this decidedly first world public health problem,5 which—along with the cost—will hopefully relegate the boutique raw water craze to a mostly forgotten fad by this time next year.

1 The safety of bottled water is the responsibility of the US Food and Drug Administration (FDA). https://www.fda.gov/Food/ResourcesForYou/Consumers/ucm046894.htm.

2Unfiltered Fervor: The Rush to Get Off the Water Grid. https://www.nytimes.com/2017/12/29/dining/raw-water-unfiltered.html.

5Indeed, at the time this perspective was written, new articles, op-eds and blogs on raw water continued to appear daily; for example: https://www.theverge.com/2018/1/1/16839092/raw-water-unfiltered-untreated-disease-toxins-microbes-minerals-cholera-new-york-times and https://www.techly.com.au/2018/01/03/meet-raw-water-dumb-new-health-trend-2018/.