Are Drinking Water and Ice on U.S. Airlines Safe?

Flying while thirsty? Every year, millions of Americans travel on thousands of commercial airplanes visiting friends and family, taking well-deserved vacations, or conducting business. While many travelers are concerned about their checked baggage arriving, chances are few think about the quality and safety of the drinking water or ice on their flight. But according to several recent news features, independent studies, and a peer-reviewed research article, perhaps more of us should—especially on international and long flights. 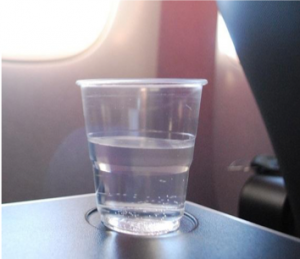 Yes. Drinking water safety on airlines is jointly regulated by the U.S. Environmental Protection Agency (EPA), the U.S. Food and Drug Administration (FDA), and the Federal Aviation Administration (FAA). EPA regulates systems that supply drinking water to airports and onboard planes through the Aircraft Drinking Water Rule (ADWR). FDA regulates water used in food and drink preparation, including ice and heated beverages such as coffee and tea, as well as water supply lines inside the aircraft. FAA oversees operation and maintenance of aircraft potable water systems. It is worth noting that the safety of airline drinking water systems relies on self-monitoring and reporting results to EPA. 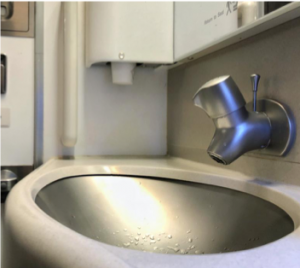 Under the ADWR, EPA requires airlines to “routinely disinfect and flush” the tanks and public water systems of their aircraft at least once per year. Airlines must also develop and implement a coliform sampling plan covering each aircraft they own or operate, including galley and lavatory taps, though the latter may include a “do not drink” sign or infographic. Because large amounts of coliform (and E. coli) bacteria are found in feces, their presence is used as an indicator of sanitary conditions as well as drinking water quality and disinfection adequacy. Bacteria sampling on an aircraft is based on the frequency of routine disinfection and flushing. Depending on the coliform test results, the ADWR includes requirements for repeating tests, additional sampling for E. coli bacteria (which are a better indicator of fecal contamination), corrective disinfection and flushing of tanks, restricting access to aircraft water, and notifying passengers and crew.

Given this regulatory structure to protect passengers and flight crew, it seems reasonable to expect safe water and ice on all U.S. flights, and given that dehydration remains a big issue for many airline travelers. But some extra precautions may be in order. According to one article, many flight attendants (but not all) do not drink the tap water and avoid hot water, coffee, or tea available on flights, not trusting the cleanliness of the aircraft and adequacy of water testing. A recent investigation of airline food and water safety conducted by Hunter College’s NYC Food Policy Center of 11 airlines concluded:1

It’s probably best to avoid drinking water from the tap on a plane, which also means staying away from coffee and tea…because the water tanks are not emptied very often (you would think they’d be emptied and cleaned at least once a day, but this is not so). So water is just sitting for long periods of time in what appear to be not-so-clean tanks.

It is worth mentioning that almost every airline included in that investigation took issue with the above recommendation and the suggestion that they do not clean their water tanks enough. An Irish study published in 20152 concluded that aircraft water supply tanks are conducive for microbial growth and that water tested on a plane making long-haul flights was significantly more contaminated with bacteria than a short-haul plane. The researchers also reported that water service vehicles and hoses were a significant source of bacteria. Although none of the bacteria species they found were considered to be disease-causing (pathogenic), the authors concluded that some could cause illness in immunocompromised passengers.

Dr. Andrew Weil, a well-known specialist in preventive medicine and director of the Arizona Center for Integrative Medicine at the University of Arizona, stated the following in a December 2017 blog:3

Healthy people are unlikely to get sick by drinking a cup of coffee or tea made with tap water on planes. It is probably not wise to use airplane tap water to fill a baby’s bottle, and those with a compromised immune system probably should avoid airline tea or coffee.

If concerns over airline water quality and safety were not enough, you might want to add ice to the list. Icemakers and ice containers (bagged ice might be of less concern) on aircraft can be contaminated with coliform and other bacteria and are rarely disinfected.

How to Stay Safely Hydrated on Your Next Flight?

First, please take a look at our air traveler’s guide and tips how to avoid getting sick. Next, stay hydrated! These days, if you ask for water, you’re likely to get a bottle from the beverage cart. If not, you can always ask for bottled water, some juice, or a can of soda, but you might want to skip the ice. And because most airlines still use water from the planes’ tanks to make tea or coffee, consider purchasing one after the security checkpoint, but before boarding.