A sixteen year old girl in Miami wakes up on a normal day, showers, dresses, eats breakfast, and is off to school, filled with thoughts of friends and classes. Seven hundred miles away in Haiti, sixteen year old Vidjinia Methelus begins her day at dawn with a 30 minute walk to an irrigation stream where she will bathe without privacy and collect water for her family’s cooking and bathing needs.

Vidjinia balances a full water bucket on her head for the walk home, which sometimes gives her a headache or soreness in her head and neck.  But after her morning ordeal, Vidjinia is off to school, and like the sixteen year old in Miami, Vidjinia too is filled with thoughts of friends and classes. Later in the day, as teens in Miami attend to homework and after-school activities, Vidjinia makes her second trip to the stream for her family’s water needs.  A new episode of CNN’s “Vital Signs with Dr. Sanjay Gupta” highlights Haiti’s water crisis through Vidjinia’s daily routine, and discusses some of the technological solutions that are easing the burden of securing safe water in that troubled nation.

“We Need a Revolution to Occur”

Clean water is the lifeblood of society, and societies without clean water cannot function successfully. Dalebrun Esther, “foot soldier on the ground” in Haiti for the nonprofit International Action, says, “Once we solve the drinking water problem in Haiti, we will solve 50 percent of health-related illnesses…We need a revolution to occur to save the Haitian people, who in 2014 still cannot have access to safe drinking water.”

A revolution is what it will take, but nations like Haiti can build on a public health revolution that already occurred in the US 106 years ago.  That historic revolution is chronicled in Michael J. McGuire’s book, “The Chlorine Revolution:  Water Disinfection and the Fight to Save Lives” (review).  In the years before widespread drinking water chlorination, tens of thousands of Americans died every year from waterborne illnesses like typhoid fever and cholera.  In 1908, a courageous New Jersey physician, Dr. John Leal, initiated a bold effort to reduce typhoid fever levels in Jersey City, New Jersey by adding very low levels of chlorine disinfectant to the city’s drinking water.  The effort was so successful that chlorination spread rapidly across the country, and waterborne typhoid was virtually eliminated in the US by 1941.  Now, thanks to the efforts of International Action chlorination is starting to transform lives in Haiti. 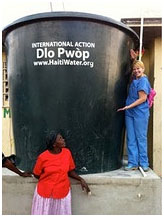 According to CNN, since it started working in Haiti in 2005, International Action has provided over 250 water “chlorinators” serving some 300,000 people from community water kiosks in both urban and rural areas.  Chlorinators are helping to provide clean drinking water in Haiti until permanent water treatment infrastructure becomes a reality there.

Chlorine is applied to raw water in a chlorinator in the form of “hockey puck” tablets of solid calcium hypochlorite.  By destroying bacteria, viruses and some parasites in the water, chlorine helps control outbreaks of waterborne illnesses, such as cholera, typhoid fever, and hepatitis.  A helpful feature of chlorination is the measurable presence of a chlorine “residual,” a low, protective level of chlorine that remains in drinking water.

These are not care-free years for young Vidjinia and her peers in Haiti, and the problem is not limited to Haiti.  As told in the CNN episode, “it is estimated women and girls worldwide spend more than 150 million hours every day fetching water for their families, a collective loss of productivity that is staggering.”  Meanwhile, at United Nations headquarters in New York, an “Open Working Group” is formulating a new set of Sustainable Development Goals for the post-2015 UN agenda.  It is likely that one of these goals will address global water and sanitation issues.  That goal should go beyond the Millennium Development Goal of increasing access to “improved water sources,” and include a measurable indicator of drinking water quality, such as a verifiable chlorine residual and water free of E.coli.  The recontamination of water supplies is greatly reduced when there is a World Health Organization recommended level of chlorine in water.1  Chlorinators are one positive step in the right direction for families like Vidjinia’s in places like Haiti. But like Vidjinia’s daily trek to the irrigation stream, there are many more steps to be taken.

1According to the World Health Organization, the optimum chlorine residual in a small, communal water supply is in the range of 0.2 to 0.5 mg/l.