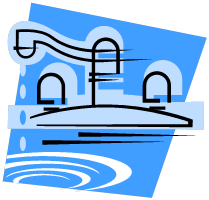 There’s a controversy brewing in the Mississippi River city of Brainerd, Minnesota that is about to boil over.  On October 28, the Brainerd Public Utilities Commission will debate whether or not to chlorinate the city’s drinking water on a permanent basis.  The question for many in the municipality of nearly 14,000 is whether disinfecting is worth potentially changing the taste of water that has been called “the world’s best drink”.

The vast majority of US water systems add a residual level of chlorine disinfectant to protect water quality as it travels from the treatment plant to the tap. Not so in Brainerd.  According to an October 11 article in the Star Tribune, chlorine is added to Brainerd’s water only when bacterial contamination is detected.  Chlorination has had to be employed in Brainerd three times since 1987, including in September, when a water main break contaminated the supply, forcing residents to boil their tap water before consuming it.

The city of Brainerd obtains its drinking water not from the nearby Mississippi River, but from six groundwater wells ranging in depth from 120 to 187 feet, according to a May, 2013 Drinking Water Report.

Brainerd adds fluorine to drinking water for dental health, but has resisted chlorination because of taste and chemical safety considerations and concerns over the potential to develop disinfection byproducts.  The World Health Organization International Programme on Chemical Safety stated in 2004:

“The microbiological quality of drinking-water is of paramount importance and must receive priority over any other considerations in relation to drinking-water treatment. However, the use of any chemical disinfectant results in the formation of by-products that themselves may be of health significance.  A thorough understanding of how these DBPs form and the factors that control their formation is valuable in achieving a successful balance between satisfactory inactivation of pathogens and the minimization of DBP formation. The microbiological quality of drinking-water should always receive priority over the minimization of DBPs.”

Why not continue with the status quo?

Is it good enough to monitor for contaminants and apply disinfectant only when contaminants are detected?  That’s been the status quo, but the population of Brainerd deserves the full protection of disinfected drinking water.  Foregoing disinfected drinking water is like walking blind-folded across a road:  Most of the time you are safe (i.e., you have enough time to move when you hear the car coming), but the consequences of the few times you are not safe are absolutely disastrous (i.e., when you are hit by an electric car making no noise).  Risk deals not only with the frequency of an event (i.e., how often it occurs) but also with the consequences of the event (i.e. in this case…possible debilitating injury or death).

Not very long ago, the Canadian town of Walkerton, Ontario learned the hard way that undisinfected drinking water can kill. In 2000, seven people died and more than 2,300 became ill after E. coli and other bacteria contaminated the town’s water supply.  A report published by the Ontario Ministry of the Attorney General concluded that, even after the well was contaminated, the Walkerton disaster could have been prevented if the required chlorine residual level had been maintained.

There are many ways to disinfect drinking water, including chlorinating, adding ozone or applying ultraviolet radiation, but only chlorine-based disinfectants provide a long-lasting residual level of protection for the trip that water takes through the pipes to get to you, the consumer. That’s why the Environmental Protection Agency requires a low protective level of chlorine be added to most US drinking water as it exits the treatment plant.  It’s a critical public health safeguard.

If a healthy adult wants to play Russian Roulette with their own health, well that’s not being very smart, but to play that game with those that are likely to get sick and/or die (i.e., the young, the aged, the infirmed), is not being a good parent, a good citizen or a good person.  Are we not our brother’s keeper? The Brainerd Public Utilities Commission should put public health first and implement drinking water chlorination.

Bruce K. Bernard, PhD, is President of SRA Consulting, Inc. and Associate Editor of the International Journal of Toxicology.