How can a Parent Help Maintain the Fun and Decrease the Risks Associated with Water Parks? 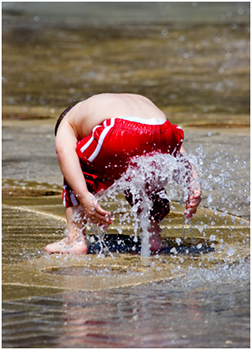 Interactive spray fountains, splash parks and splash pads are popular summertime venues where kids can cool off and have fun in “zero-depth” or very shallow water.  Many urban areas feature these venues; families discover they can beat the heat inexpensively without leaving the city.  They are also found in amusement parks and as part of municipal pool complexes.  But as enjoyable as interactive water features can be, they can also make kids sick when certain risky behaviors are practiced (and these risky behaviors are observed frequently).

Exposing buttocks to the spray of water and placing mouths over water spouts may expose kids to germs that can spread illness, especially diarrhea.  According to a 2010 study by Nett et al., children who engage in these practices raise the risk of fecal contamination of play water.  The researchers found these activities take place regardless of the presence of educational signs, hygiene attendants or adult supervisors.

What You Didn’t Bargain for in Water Parks

Exposing the buttocks, even if diapered or clothed, to interactive fountains increases the risk for fecal contamination of splash park water.  (According to a 2000 study by Gerba, swimmers may have up to 10 grams of residual fecal material adhering to their skin.)  Children squealing and laughing happily in water parks are likely to ingest some of the sprayed water, risking ingesting contaminants found in feces.  The “fecal to oral route” of disease transmission, which public health professionals strive to interrupt, can be quite direct in water parks!  Similarly, by placing their mouths over water spouts, children risk spreading germs from their mouths to others in the resulting spray.

A 2007 outbreak of cryptosporidiosis in a municipal park in suburban Idaho sickened roughly 50 people exposed to a splash feature there.  Cryptosporidiosis is caused by the waterborne parasite cryptosporidium and is characterized by diarrhea or abdominal cramps, nausea, vomiting, fever or body aches. There are no effective antibiotics for cryptosporidiosis.  A report by CDC following the outbreak noted “…young children were observed to be the predominant users of the splash park, and diapered children frequently sat on top of splash features.  There was no opportunity for children to shower before enjoying the splash feature.  Nearby restrooms lacked showers and even lacked soap for hand-washing.

Recommendations: The Short Run and the Long Run

In the short run, parents and adult supervisors can be vigilant in halting risky behaviors exhibited by children in interactive water parks, such as sitting on water spouts and covering water spouts with their mouths.  But are adults even aware that these behaviors are risky?  Interestingly, Nett et al. (2010) reported approximately one-third of splash park supervisors surveyed were unsure if splash parks can cause diarrhea; a small fraction perceived no link.  Public education is needed.

Water used in these parks is usually filtered and disinfected, but risky behaviors can expose children to pathogens in the short interval of time that water is in the play area before being recirculated through the treatment process.  In the long run, therefore, design barriers to disease transmission could be imposed in water play areas. Nett et al. (2010) suggest supplemental ultraviolet light disinfection of play water to provide added protection against chlorine-resistant pathogens, such as cryptosporidium (this was done at the site of the Idaho outbreak to reduce the risk of another outbreak).  We agree, and also suggest the physical design of water parks could be altered to ensure water spouts are beyond the reach of children, such as a vertical shower design.  We think this could help curtail the spread of germs via the troublesome exposure routes described here, clearing the path for pure summer joy.

Bruce Bernard, PhD, is President of SRA International, Inc. and Associate Editor of the International Journal of Toxicology.