How to Help Prevent Getting Sick at Pools, Spas, Hot Tubs and Waterparks 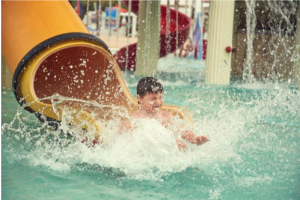 Swimming is a popular form of exercise across all age groups, according to U.S. Bureau of Labor Statistics. Year-round pool swimming is generally accessible and affordable at a variety of public and private facilities. Similarly, hot tubs and spas are enjoyable, therapeutic features, and waterparks are a fun destination for families with young children. But what is your risk of contracting a waterborne illness in these treated recreational water facilities? How can you help prevent getting sick? Let’s dive into the data.

The U.S. Centers for Disease Control and Prevention (CDC) tracks outbreaks that occur in treated recreational water venues such as pools, spas, hot tubs and waterparks. Outbreaks in these environments can be caused either by pathogens (microbes that can cause disease) or, on a rare occasion, a chemical.

What Constitutes an Outbreak?

An outbreak associated with treated recreational water means a report of similar illnesses in two or more persons linked by location and time of exposure to pathogens or chemicals in the surrounding air of the treated water environment.

Among the outbreaks caused by pathogens, most in the period 2000-2014 (58%) were caused by Cryptosporidium, a chlorine-resistant parasite that causes diarrhea. Legionella, the bacterium that can cause Legionnaires Disease when it is inhaled in water droplets in contaminated water venues, caused 16% of the outbreaks. And 13% of the outbreaks were caused by Pseudomonas, the bacterium that causes swimmer’s ear and “hot tub rash” by skin contact with contaminated water. Interestingly, both Legionella and Pseudomonas are susceptible to chlorine disinfection.1 These pathogens can, however, “hide” from chlorine by embedding themselves in biofilms, slimy impenetrable coatings found on wet surfaces, such as pool tiles.

A new, free American Chemistry Council video, Preventing Unintended Chemical Injection, provides tips to pool operators on how to prevent chlorine gas exposures, which can occur when the water circulation pump is inoperative but acid and disinfectant continue to be fed into the pipelines.

What these CDC data show is that the leading causes of treated recreational water outbreaks are either: (a) pathogens that are able to “evade chlorine,” because, as in the case of Cryptosporidium, they are resistant to the chemical disinfectant,2 or alternatively, because they “hide out” in biofilms; or (b) pathogens that are vulnerable to chlorine, but able to thrive in recreational water because of inadequate levels of disinfectant.

A case in point to illustrate the latter scenario is the spring 2018 death of an elderly man from Legionnaire’s Disease shortly after he visited a California hotel pool and hot tub. A media report noted that two days before the man’s death, inspectors found no detectable chlorine in either the pool or hot tub. CDC reports at least six of the eight deaths associated with treated recreational water outbreaks in the 2000-2014 period were associated with Legionella!

Of the 22 outbreaks caused by chemicals in the period 2000 – 2014, causes listed by CDC are “excess chlorine, disinfection by-product, or altered pool chemistry.” Clearly, it is important to get the pool chemistry right! Too little chlorine, for example, can cause outbreaks from chlorine-susceptible pathogens. Fortunately, there is a wide margin of safety between recommended free chlorine levels (1 – 3 parts per million) in the pool and higher levels (›10 ppm) that could cause harm.

Take-aways for the Public

Understanding the causes of the most common recreational waterborne outbreaks can help you prevent them:

Armed with the facts about treated recreational water facilities, you can make smart decisions about where and whether you swim on any given day.

1 Both Legionella and Pseudomonas bacteria are also susceptible to bromine disinfection, though bromine use is not as common as chlorine use in treated recreational waters.