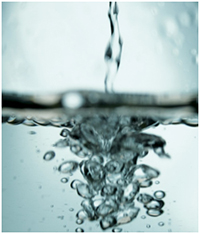 Chlorine and chlorine-based disinfectants are used worldwide to destroy germs in drinking water and swimming pools. One of the reasons for the widespread use of chlorine disinfectants is that they provide a “residual” level of protection against waterborne pathogens. A chlorine residual is a low level of chlorine remaining in water after its initial application. It constitutes an important safeguard against the risk of subsequent microbial contamination after treatment—a unique and significant benefit for public healthi.

What happens to chlorine when it is added to drinking water or swimming pools?  According to the US Centers for Disease Control & Prevention’s Chlorine Residual Testing Fact Sheet, chlorine proceeds through a series of reactions:

A Safety Marker Too

In both drinking water and swimming pools, the chlorine residual represents a smart use of chemistry and provides a remarkable public health safeguard!

iOne other disinfectant—bromine–provides a residual level of protection in water. Bromine is used in swimming pools, but more frequently in spas. It is not used in drinking water disinfection.