What is Flu and How Does it Spread?

As we begin the New Year, flu is spreading in the US. The map below from the Centers for Disease Control and Prevention (CDC) website shows the current geographic distribution of flu. Media coverage of this phenomenon, and unfortunately, our own experience with flu, lead many to ask, “What is flu, and how does it spread?” 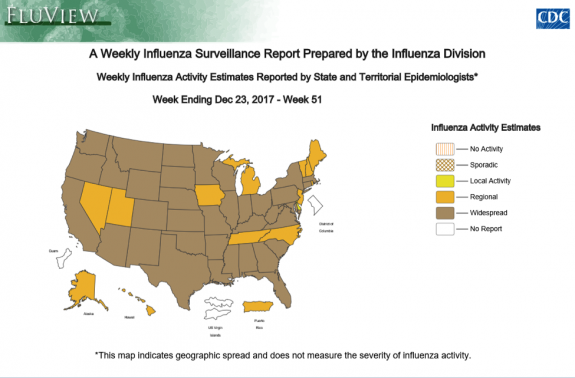 “Flu,” short for “influenza,” is a contagious respiratory illness caused by a group of viruses. Flu viruses can infect the nose, throat, and sometimes the lungs of human hosts, according to the CDC. Flu can cause mild to severe illness (and even death), including cough, sore throat, runny or stuffy nose, muscle or body aches, headache and fatigue. Fever may or may not accompany flu, and young children are more likely than adults to experience vomiting and diarrhea from flu. Some of the symptoms of flu are the same as those of colds. The fluandhealth.org chart, “Is it the Flu or the Common Cold?” can help you distinguish between flu and cold.

History in a Name
“Influenza” is an Italian term for “influence,” based on the historic notion that epidemics were due to the influence of the stars.

Every year from about October to May, seasonal flu viruses circulate among the US population, leading to some hospitalization and death. CDC estimates that the number of US deaths from flu in recent years ranged from a low of 12,000 (in the 2011-2012 flu season) to a high of 56,000 (in the 2012-2013 flu season). The World Health Organization estimates flu infections annually result in between three and five million cases of severe illness worldwide and between 250,000 and 500,000 deaths. The infamous 1918-1919 “Spanish Flu” was a pandemic—a global infection—that infected nearly one-third of the world population and killed at least 40 million people. Researchers note that at approximately 7%, the mortality rate of the Spanish Flu pandemic was about 25 times that of other flu pandemics.1

Flu spreads mostly in colder months when people are most likely to be in close, indoor contact. The most important flu prevention strategy is getting vaccinated every year. Obtaining a “Vaccine by Halloween”2 provides optimum protection, but later vaccination is still very helpful. The vaccine takes about two weeks to become fully protective; flu season typically peaks in February. If you haven’t gotten your flu shot yet, it is not too late!

According to CDC, flu viruses are believed to be transmitted from person to person through small droplets of mucous containing the virus. Coughing, sneezing and even talking can project these droplets into the air, where they may land in the mouths or noses of others. Alternatively, droplets may land on frequently touched surfaces and be transmitted via the hand-to-mouth route. Based on an understanding of these routes of transmission and the potential reduced effectiveness of this year’s vaccine, it will be doubly important to:

Flu viruses mutate, making it difficult to know which ones will circulate in any given year, which is why we can become sick with flu multiple times throughout our lives. This year’s predominant flu virus strain appears to be an H3N2 variety, the same strain that caused record flu activity in Australia during the last Southern Hemisphere winter. On December 27, 2017, CDC issued a health advisory recommending more and earlier use of antiviral medicines for treatment because (a) H3N2 virus-predominant flu seasons have been associated with more hospitalizations and deaths in older and younger age groups, and (b) flu vaccine effectiveness is generally lower against H3N2 viruses than other types of flu viruses.

According to CDC, when the virus enters your nose, throat, or lungs, a protein on the virus’ surface, known as “hemagglutinin” (representing the “H” in H3N2) binds “like a key to a lock” to receptors on the surface of respiratory tract cells. Once that “key” is inserted, a flu infection has begun. Viruses require living hosts, e.g., you, to survive and multiply. Flu symptoms may appear in one to four days, but you may be contagious starting one day before symptoms appear and five to seven days later, according to an article in the British Medical Journal. As the virus multiplies, your immune system battles the foreign “invaders.” The battle duration, and therefore the period of infection, normally lasts three to seven days, resulting, most often, in victory–and a return to health–for the human host.

Armed with information on what flu is and how flu spreads, we hope you will take steps to avoid becoming a human host for flu!

2 See, for example, this WJHG.com video.