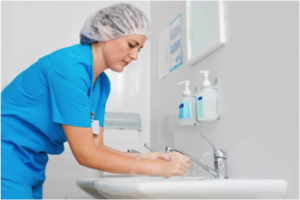 Superbugs are sneaky creatures. A new University of Virginia (UVA) study reveals how these microbes, once washed down the drains of hospital sinks, colonize the drainpipe and rise up slowly along the sides of the pipe, eventually reaching the sink strainer. The researchers hypothesize that when the sink faucet is operated, the potential pathogens and superbugs may be splashed from the strainer over a distance of more than two feet, presenting an infection risk to vulnerable hospital patients.

Superbugs are multidrug resistant bacteria that are responsible for two million cases of illness and some 23,000 deaths per year, according to the Centers for Disease Control and Prevention (CDC) website. A CDC report notes that over 720,000 infections were contracted in hospitals in 2011 and that 75,000 of those patients died. The UVA researchers found over 32 recent reports describing the spread of bacteria resistant to the important antibiotic carbapenem via sinks and other reservoirs of water within hospitals. Most of the reports are associated with “outbreaks in the intensive care setting, affecting the critically ill and the immunocompromised,” according to a related study.

A “Staged Mode of Transmission”

The UVA team describes a “staged mode of transmission” to explain how hospital patients and staff may be exposed to superbugs. The microbes colonize the P-shaped traps, or “P traps,” of hospital sink drainpipes just below the bowl of the basin, where water pools. From there, nourished by various discarded liquids, such as intravenous fluids, feeding supplements and leftover beverages, they migrate back toward the sink at the rate of about one inch per day, moving as a growing biofilm. Biofilms are slimy mats of microorganisms that are difficult to wash away or destroy.

Based on the design of most sink plumbing, in approximately one week’s time the superbugs are present in the sink strainer area. From there, they are well-positioned to be dispersed around the sink and onto adjacent counters by water streaming from the flowing faucet. The frightening scenario culminates with the exposure of patients, who can least fight infection, to antimicrobial resistant superbugs.

Findings from the “Sink Lab”

To better study the stages of transmission of superbugs from hospital sink plumbing, the UVA research team constructed a unique “sink lab.” The lab features five identical sinks modeled after the intensive care unit (ICU) sinks in UVA’s Charlottesville hospital and connected in wastewater plumbing. A harmless form of E. coli was used as a surrogate pathogen. One significant finding from the “sinks in series” design is that the bacteria can spread through plumbing connections to neighboring sinks, demonstrating that the superbugs spread both upward and downward out of P traps.

Does the design of the hospital sink and its plumbing require modification to help prevent this mode of exposure to superbugs? Is the P-shaped trap—originally designed to prevent the escape of sewer odors—an inadvertent public health risk? Ironically, the sink is often the first destination for people entering and the last stop for those leaving the ICU, as hand-washing is a well-known and strongly endorsed infection prevention control measure. Should hospital sinks be redesigned to prevent water from the faucet splashing into the drain area and casting superbugs into the ICU environment? Or can the P-shaped section of the drain be treated in a way that prevents colonization by bacteria?

Between 2011 and 2012 a superbug outbreak at the National Institutes of Health Clinical Center killed 11 patients. According to an interview with Dr. Tara Palmore, a hospital epidemiologist at the Center, bleach and scrubbing helped end the outbreak. The sink traps were removed and “scrubbed out with wire brushes and bleach,” followed by daily bleach spraying down the drains. Over time, the drug-resistant bacterial colonies were removed. Yet, Palmore notes that there are some very difficult cases in which nothing seems to work.

The UVA team is now working with the CDC to understand exactly how patients may be infected with superbugs emerging from drainpipes. This will help inform the solution to the insidious problem of deadly hospital-acquired superbug infections. We congratulate the researchers on their significant work to date and eagerly await further results of their important efforts.