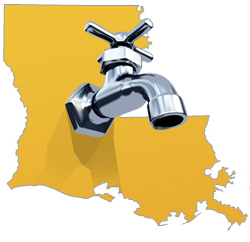 A focused effort to rid a Louisiana water system of a rare but deadly amoeba by raising the minimum chlorine disinfectant level is paying off.  The Louisiana Department of Health & Hospitals announced recently that 22 water samples taken in St. Bernard Parish in late January tested negative for the amoeba Naegleria fowleri.  A new statewide disinfection rule mandates a minimum level of 0.5 parts per million of chlorine at all points in water distribution systems, up from the federal requirement to maintain a “trace” or “detectable” level of chlorine.

Why the Fuss about Naegleria?

Two Louisiana deaths in 2011 and one in 2013 are blamed on Naegleria, the “brain-eating” amoeba, which  can migrate to the brain from nasal passages exposed to this pathogen, causing “amoebic meningoencephalitis” (“PAM”) and almost certain death.  People cannot be infected with this parasite by drinking water, only by nasally inhaling it or otherwise having it enter nasal passages.  The two 2011 deaths were associated with neti pot use to cleanse the nostrils using tap water; the 2013 death involved a young child who is believed to have inhaled Naegleria-contaminated water while playing on a backyard water slide. Investigations following the 2011 deaths found Naegleria in the home water system of one victim but not in the municipal water serving the community.  The identification of Naegleria in St. Bernard Parish during the 2013 investigation marked the first time that this pathogen was found in any municipal water system in the United States.1  At that time, CDC confirmed its presence at four points in the distribution system; some water samples also contained very low levels of chlorine.  Chlorine levels were immediately raised sufficiently to destroy Naegleria.

According to CDC most Naegleria infections are associated with swimming in warm freshwater lakes and rivers.  Infections associated with treated water are much rarer because chlorine destroys Naegleria, but CDC notes that Naegleria can grow in public and private water tanks and pipes, when little or no disinfectant is present. Pipes and hot water heaters are especially vulnerable to Naeglaria infestation when scale and biofilm are present and when the water temperature is near 106° F, which is the optimal temperature for this pathogen’s proliferation.  It can also thrive in inadequately chlorinated swimming pool and spa water.

On November 7, 2013, Louisiana Department of Health & Hospitals issued an emergency rule requiring water systems in Louisiana, by February 1, 2014, to maintain a residual level of chlorine of 0.5 parts per million2 throughout distribution systems, and to increase the number of water sampling sites by 25 percent.  State Health Officer Dr. Jimmy Guidry stated in a press release: “This action will help our water systems protect against parasites like Naegleria fowleri in the future. Our water is safe to drink; this change will simply make our water safer for all uses.”

The Louisiana Department of Health & Hospitals notes it will conduct additional sampling and testing in St. Bernard Parish as temperatures warm through the next few months, “making water more inviting for the ameba.”  Additionally, as a result of input from national and international experts, water samples from St. Bernard and DeSoto parishes will be tested using an efficient, two-step protocol that originated in Western Australia.  Water samples will first be tested for the presence of “thermophilic” or “warm water-loving” amoeba, which are common and do not always present a health risk, followed, if warranted, by the more resource-intensive and costly specific test for Naegleria fowleri.

We congratulate Louisiana health officials for their aggressive response to a small but disturbing number of Naegleria incidents, and we look forward to their continued leadership on this issue.

What Individuals Can Do to Reduce their Risk of Naegleria Infection

1Naegleria was also identified in Water Works System No. 1 in DeSoto Parish, Louisiana, in 2013.
2Systems using chloramine (chlorine and ammonia) are required by the emergency rule to maintain a minimum chloramine residual of 0.5 parts per million