New Study Forecasts How the Flu Spreads Across America

A University of Chicago research team has identified the critical factors that affect the annual spread of the flu across America. In their new study, the researchers compare the spread of seasonal flu to the spread of a wildfire, identifying the “spark,” “dry tinder” and “wind” required to disperse the illness from place to place. 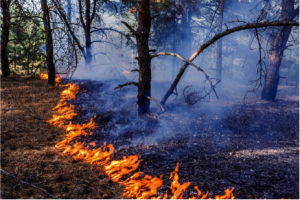 The flu transmission models developed by the scientists are based on enormous data sets, including nearly a decade of medical insurance records from 40 million families and 1.7 billion geo-located “tweets.” A potential outcome of the study is that future “flu forecasts” could help save lives and reduce flu-related healthcare costs and human productivity losses.

All the Elements of a Wildfire

The spark: According to the study, flu cases tend to originate in the warm, humid, southern and southeastern US. Ideal “flu conditions” include weeks when there has been a drop in specific humidity accompanied by declining air temperature, wind speed and solar flux, the “signature” of a cold air front, according to the researchers. Once “sparked” in the South and Southeast, flu spreads north, away from the Gulf of Mexico and Atlantic coasts. This pattern can be seen from the Centers for Disease Control & Prevention’s (CDC) online interactive map of this year’s “influenza activity” (click on “Play” for the “2017-18” season in the top left corner of the interactive map web page).

Dry Tinder: The researchers hypothesize that a higher level of social connectivity found in southern US communities, and revealed by the geo-located tweet data, provides the “dry tinder” for spreading flu. The team determined local residents’ travel patterns by tracking tweets originating from home, work, and family and community events. These geo-located electronic messages demonstrate that compared to the country as a whole, southerners have a higher number of close friends and friends who are also neighbors; many live in close-knit communities. One possible reflection of their enhanced social connectivity is that at the peak of infection, 20% of people in southern states are infected with flu compared to 4% in other parts of the country.

The Wind: The “wind” to move the flu about is provided largely by the collective movement of people in southern communities over short distances by land, for example, by driving from one county to another nearby one. Interestingly, although the research team found that long-range air travel and nearness to airports can be factors in sparking an epidemic, it is short-range mobility that sustains the spread of infection over a flu season.

Preventing the Flu through Forecasting

Seasonal flu is a major public health issue. CDC estimates that the number of US deaths from flu in recent years ranged from 12,000 (in the 2011-2012 flu season) to 56,000 (in the 2012-2013 flu season). Prevention measures are already broadcast as a public health service in many areas during flu season. Flu forecast models, such as those developed by the University of Chicago team, could help public health officials target populations in vulnerable regions with greater precision, ultimately helping to reduce the spread of flu. This could be achieved by recommending vaccinations for those who have delayed them, or that populations at greater risk of flu refrain from large gatherings and that institutions exercise enhanced infection prevention measures.

We congratulate the University of Chicago scientists on their strategic use of data and interesting findings about how the flu spreads and look forward to realizing the public health benefits of their research.