Neti Pots, Naegleria and Your Health 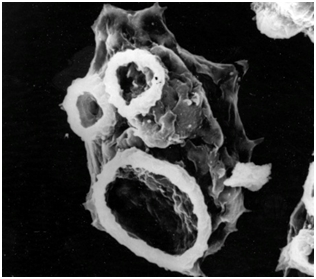 Neti pot1 use is being blamed for the deaths of two Louisiana residents who developed a rare fatal brain infection after using the device to clear their sinuses (The Advocate article). The infections are believed to have been caused by the water-dwelling parasite, Naegleria fowleri. According to the Centers for Disease Control and Prevention (CDC), Naegleria may be present in warm lakes and rivers and geothermal waters, such as hot springs and natural spas. It can also live in inadequately chlorinated swimming pool water. If the parasite is inadvertently inhaled and migrates from the human nose to the brain, it can cause “amoebic meningoencephalitis” and almost certain death. People cannot be infected with this parasite by drinking water.

Neti pot users circulate warm saline water through the nostrils; if water is contaminated with Naegleria, which appears to have been the case for two unfortunate people in Louisiana, the result can spell tragedy. In the case last June of one victim, a young man in his 20s, the infection was traced to the man’s home water system even though the parasite was not found in city water samples. More recently a 51-year old Baton Rouge woman succumbed to the brain infection caused by Naegleria. These cases are troubling, and we anticipate more information will be forthcoming as a result of further investigation.

What are the water supply sources and how is water treated in the relevant areas of Louisiana in which the two Naegleria cases were reported?

Under what conditions could ‘clean’ municipal water be re-contaminated before an individual uses it?

What is the real risk of infection from neti pot use? What are the relevant factors?

Are there other options for safe neti pot use other than time-consuming boiling and cooling tap water or purchasing distilled or sterile water?

The Louisiana Department of Health cites statistics that demonstrate how rare Naegleria infections are: Between 2001 and 2010, 32 infections were reported in the US, most in southern states and mostly during summer, particularly during extended heat waves. Of the 32, 30 were caused by contaminated recreational water and two resulted from contact with a geothermal water supply. Updated statistics will include the recent deaths associated with neti pots.

What You Should Know about Naegleria

The greatest risk to humans of Naegleria is its inadvertent inhalation in contaminated water, usually through two routes:

News of rare Naegleria infections is not cause for alarm, just reason to be well-informed. We pledge to follow this issue and keep you updated.

For more information on disinfecting surfaces, please go to www.disinfect-for-health.org.

For more information on disinfecting pools, please go to www.healthypools.org