A rare but deadly “brain-eating” waterborne amoeba is making US headlines once again this summer in California, Minnesota and Louisiana.  A 21-year old California woman died on June 20 of an infection caused by Naegleria fowleri, according to a news report.  An investigation is ongoing, but the infection may have resulted from her exposure to the amoeba in a natural hot spring.  On July 9, a Naegleria infection killed a 14-year old boy who swam in Minnesota’s Lake Minnewaska, according to Outbreak News Today.  And Naegleria fowleri’s presence was confirmed in two sampling locations in St. Bernard Parish, and one in Ascension Parish, Louisiana, according to KATC.com.

It is important to note that Naegleria infection cannot be contracted by drinking water contaminated with the organism, but it can be contracted when Naegleria-contaminated water enters the nasal passages.  A young boy died of Naegleria in St. Bernard Parish in 2013 after playing with a backyard water slide that used household water.  No illness has been reported associated with the detections of Naegleria in St. Bernard Parish water supply during 2014 and 2015 sampling programs, however.

Naegleria fowleri is a naturally-occurring single-celled organism that lives in fresh, warm waters, such as lakes, rivers, ponds and hot springs, and soil. (It also can be found in water distribution systems and hot water heaters.)  The most common months of exposure are July and August when bodies of water are the warmest.  Adults and children enjoying these outdoor venues may be vulnerable if water enters the nose when jumping or diving into water and during underwater recreation.  When water harboring Naegleria enters the nasal passages, the amoeba may travel along the olfactory nerve to the brain, where it destroys brain tissue and causes brain swelling known as primary amebic meningoencephalitis (PAM), and death.  Neti pot use for sinus cleansing also has been associated with Naegleria infections, and tap water (especially warmed with water from the hot tap) should never be used in neti pots without first boiling it.   Symptoms of infection usually begin within about five days, and death usually occurs within one to 12 days of symptoms appearing.

According to the US Centers for Disease Control and Prevention (CDC), 35 Naegleria infections were reported in the US between 2005 and 2014; of these all but two were fatal.  Young boys are most at risk.  CDC speculates that may be due to their participation in more water activities like diving and playing in sediment at the bottom of lakes and rivers.  Most infections occur in southern states, according to CDC, and in summer months when temperatures are high and water levels low.  Recent cases in Minnesota are the northernmost reported in the contiguous US.  The CDC website states that it maintains a supply of the investigational drug miltefosine, which was used as part of the treatment of the two known PAM survivors. 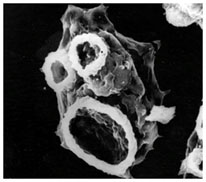 There are no data on the true risk of PAM infections. Each summer there are literally hundreds of millions of swimming occurrences that result in 0-8 infections per year by Naegleria.  The matrix at right can help put Naegleria risk in perspective.  Naegleria infection is an example of a low likelihood but high impact event.  Its rarity (low likelihood) combined with the seriousness of infection (high consequence) should it occur, results in an overall medium risk level for swimming.  For another example, consider crossing railroad tracks.  The likelihood of being hit by a train at any given time may be low, but the consequences of being hit are quite serious, producing an overall medium risk level.

Tips for Reducing Your Risk of Naegleria Infection1

1 Based on recommendations from CDC