Healthcare associated infections (HAIs) affect about one in 31 hospital patients in the U.S., according to the U.S. Centers for Disease Control and Prevention (CDC). Eliminating HAIs is an important public health goal, and one that researchers can help meet by generating the scientific data that lead to “best practices” and engineering solutions that help prevent cross-contamination of hospital surfaces. A good example is a new study on the effect of the proximity of sink basins to toilets on pathogens in sink drains in the hospital setting. The study found that the drains of sink basins closest to toilets in a Wisconsin hospital intensive care unit (ICU) had a greater prevalence of Klebsiella pneumoniae carbapenemase bacteria (KPC) than the drains of sink basins several feet away in the same room. KPC can cause HAIs, such as pneumonia, bloodstream infections, and wound infections. 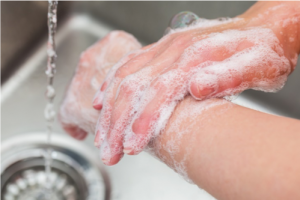 The ICU of the 600-bed hospital had experienced no documented infections with the emerging superbug KPC in the year prior to the study, yet the researchers identified KPC in over 40 swabs of hospital sink basin drains. They found that 87% of sink drains located next to toilets tested positive for KPC, whereas just over 21% of sink drains close to the entry door to the room tested positive for that pathogen. Interestingly, when the researchers identified KPC in the drain of the sink located near the entry door of patient rooms, 80% of the time it was also found in the drain of the sink located closest to the toilet. (Toilets in these rooms are not enclosed.)

The researchers say their findings suggest the sink drains in ICU rooms may be subject to cross-contamination from some or all of the following:

(b)  Bioaerosols from toilet flushing spreading bacteria into the sinks, especially those nearest the toilet

Biofilms are slimy coatings on wet surfaces that harbor complex microbial communities. In 2017, we reported in Superbugs: Rising from Hospital Drainpipes on research that revealed hospital superbugs could migrate upward through drain pipes in biofilms toward the sink strainer. Having colonized the P-shaped water trap in the plumbing under sinks, the biofilms were found to grow toward the sink strainer at a rate of about one inch per day. Once in the sink strainer area, the superbugs then could be dispersed into the near-sink environment by the impact of streaming water from the faucet. Could slowly “creeping” biofilms be spreading between toilet and sink drain plumbing in the Wisconsin ICU?

Bioaerosols are clouds of biological particles that have been sprayed into the air in the form of tiny droplets. Toilet flushing has been shown to spread pathogens through bioaerosols. A 2012 study of toilet facilities in healthcare settings found the hospital superbug bacterium C. difficile was recoverable from air sampled at heights of up to 25 cm (nearly 10 in.) above the toilet seat of lidless toilets following flushing. Nearby surfaces were contaminated with the bacteria within 90 minutes of flushing. Based on those findings, it is conceivable that bioaerosols generated during flushing could “seed” the drains of nearby sinks. Would a physical barrier between the toilet and nearby sink help reduce cross-contamination of sink drains? What other measures might help? Lids on toilets? Relocating the sink drain within the sink to prevent splashing by streaming water? Adjustments to isolate sink and toilet plumbing to prevent biofilm migration?

We all know instinctively that toilets harbor pathogens. That’s why we take sensible precautions such as thoroughly washing our hands after using the toilet and regularly treating household bathroom surfaces with efficacious products, such as chlorine-based disinfectants. Hospital toilets are particularly challenging because of the compromised health of patients who use them. Understanding how hospital superbugs cross-contaminate surfaces in the ICU can go a long way toward developing best practices and engineering safeguards to help prevent potentially deadly exposures. When it comes to reducing HAIs, the data from the Wisconsin hospital study and follow-up research will likely provide some of the critical puzzle pieces we need to understand cross-contamination in the ICU.