Childhood immunizations protect against a wide variety of diseases, including diphtheria, measles, mumps, whooping cough (pertussis), polio, rubella, varicella (chicken pox) and smallpox.  Yet, some parents reject these immunizations as unsafe, citing a fear of potential adverse health effects such as Sudden Infant Death Syndrome.  Others express hope that their unvaccinated children will be protected from diseases as a result of the widespread immunity of their peers.  The reality is that foregoing childhood immunizations is a dangerous practice that threatens the historic gains of modern disease control efforts.

A vaccine is administered to improve immunity to a particular disease. Vaccines deliver live or killed viruses, purified viral proteins, or inactivated bacterial substances, according to a special article1 on parents’ fears of immunizations in the journal Pediatrics.  The article addresses the potential health effects of the presence in vaccines of preservatives and other additives and manufacturing residuals.  These substances, especially mercury, appear to be central to parents’ concerns over vaccines.  The authors report that “Parents  should be reassured that quantities of mercury, aluminum, and formaldehyde contained in vaccines are likely to be harmless on the basis of exposure studies in humans or experimental studies in animals.” Vaccines that contain sufficient quantities of egg proteins or gelatin, they note, could induce “rare instances of severe, immediate-type hypersensitivity reactions.”

Unimmunized children are at risk of contracting and dying from diseases for which immunizations are available and safe. Children who contract vaccine preventable diseases put others at risk of getting sick as well. This reality must be weighed against the potential, but unlikely, adverse effects of getting vaccinated. According to the Centers for Disease Control and Prevention (CDC) website, CDC and other federal agencies “routinely monitor and conduct research to examine any new evidence that would suggest possible problems with the safety of vaccines.”

Whooping cough (pertussis) was one of the most common childhood diseases of the 20th century and a major cause of childhood death.  CDC notes that whooping cough remains a major health problem among children in developing countries, with 195,000 deaths resulting from the disease in 2008 (World Health Organization estimate).  Annual cases of whooping cough in the United States numbered well over 200,000 in some years in the 1930s and early 1940s, before the widespread use of the pertussis vaccine in the mid-1940s.  Subsequently, the annual number of cases of this disease declined to less than 2,000 by 1973 and remained low until 1992, which is roughly the time that concern for side effects arose and an increasing number of parents elected to not have their children vaccinated.  Since then the annual number of cases has climbed 700% as illustrated by the CDC graph at right.

The recent influx of immigrant children across the southern border of the US and their placement in various states could further increase the likelihood of the spread of vaccine preventable diseases like whooping cough, as an unknown percentage of these children are unimmunized.2

Disease rates plummet when a critical proportion of the population is immunized. That is the principle of “community immunity” or “herd immunity.” The graphic below from the National Institute of Allergy and Infectious Diseases illustrates this concept. 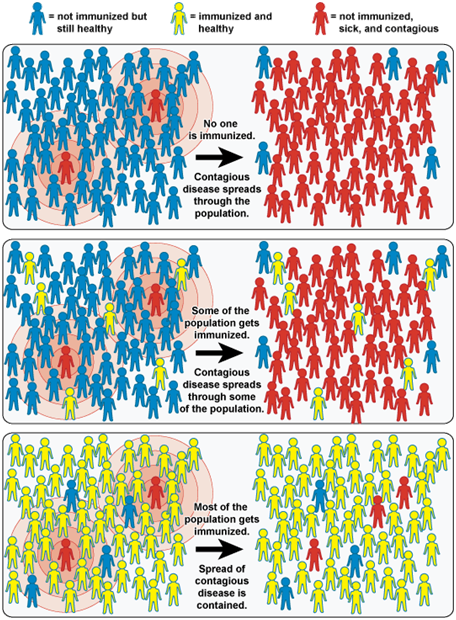 The spread of a contagious disease for which a vaccine exists can be stemmed only when a threshold level of the population is immunized.  Ideally, the few individuals who are not immunized should be only those who are ineligible because of their health status.  For everyone else, following the CDC recommended childhood immunization schedule is essential to avoiding the dire consequences of a resurgence of once-contained diseases.

For more information on childhood immunizations, please see this document from the American Academy of Pediatrics.