The Lesson in Costco Chicken Salad

The recent multistate outbreak of foodborne illness linked to Costco rotisserie chicken salad is another reminder that safe food practices are as essential to fresh produce as they are to raw meats and poultry. The Costco outbreak was traced, not to contaminated chicken or tainted mayonnaise, but to E.coli-contaminated fresh celery in a diced vegetable mix that Costco purchased from Taylor Farms Pacific in Tracy, California. The US Food & Drug Administration (FDA) notes the company has voluntarily recalled a list of products that could potentially contain E. coli-contaminated vegetables. In response to the outbreak, Costco has removed all rotisserie chicken salad from its stores and stopped further production. 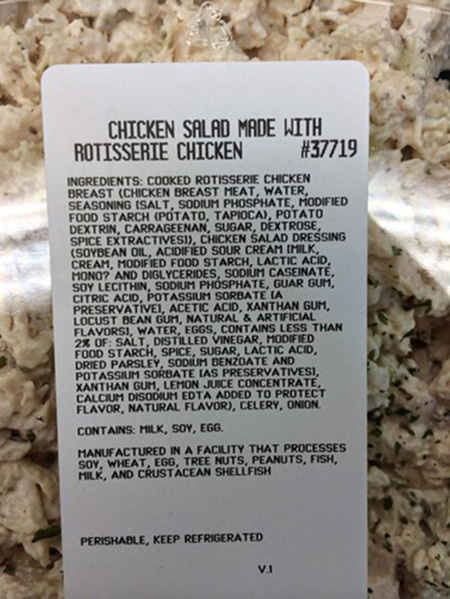 A recent foodborne illness outbreak from contaminated Costco chicken salad has been traced to E. coli 0157:H7, which produces a Shiga toxin.

According to the US Centers for Disease Control and Prevention (CDC), 19 people in seven states1 have been sickened by the outbreak of E. coli 0157:H7. Five people were hospitalized and two developed hemolytic uremic syndrome, a type of kidney failure. This outbreak is caused by a strain of E. coli more potentially harmful than that which caused the recent Chipotle outbreak (E. coli O26). The source of the Chipotle outbreak is still under investigation.

Proper Washing and Sanitizing is a Must

Fresh produce used for commercially prepared salads must be properly washed and sanitized especially when organic fertilizers such as chicken or cow manure are utilized. FDA recommendations (see Guidance for Industry: Guide to Minimize Microbial Food Safety Hazards of Fresh-cut Fruits and Vegetables) address maintaining the quality of processing water, which is “used extensively in almost all aspects of processing fresh-cut fruits and vegetables, including during cooling, rinsing, or conveying food”. When antimicrobial chemicals, such as chlorine-based disinfectants, are used to help minimize processing water contamination and potential cross-contamination, the water chemistry should be optimized for antimicrobial effectiveness. This can be done, according to FDA, by adjusting the water’s pH, the amount of organic matter in the water and the water temperature.

The Taylor Farms website highlights food safety and the company’s efforts to prevent foodborne outbreaks. Yet, recently something went awry. The current E. coli outbreak reinforces the need for agricultural producers to be ever-vigilant in their battle against microscopic foodborne pathogens. That includes a complete investigation of what went wrong at Taylor Farms, and adjusting current practices to prevent a recurrence.

A Word to Consumers

As we reminded readers in our Thanksgiving post, between 1998 and 2008, vegetables accounted for the single greatest percentage of US foodborne illnesses, although meat and poultry were responsible for the greatest percentage of deaths. Fresh produce can be a healthful addition to our diets, but everyone, from the farmer to the consumer, must be savvy when it comes to handling and preparing our fruits and veggies.

The following tips are based on the CDC “Test Your Produce Safety Savvy”:

Fred Reiff, P.E., is a retired official from both the U.S. Public Health Service and the Pan American Health 0Organization, and lives in the Reno, Nevada area.