Want to know how to prepare a delicious recipe? 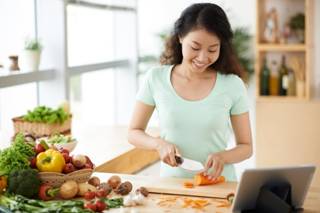 Tune in to a TV cooking show. Just don’t expect to view some of the most important cooking steps! According to a new study1 in the Journal of Nutrition Education and Behavior (abstract), today’s cooking shows are missing “an opportunity to model and teach good food safety practices for millions of viewers.” In fact, the researchers found in 39 episodes from 10 television cooking shows, the majority of episodes failed to demonstrate:

How to Sanitize Kitchen Surfaces with Chlorine Bleach Solution

Each year there are 48 million cases of foodborne illness in the US, including 128,000 hospitalizations and 3,000 deaths. Foodborne illnesses, most of which are infections caused by bacteria, viruses and parasites, can even have long-term health consequences, according to the Centers for Disease Control and Prevention (CDC). To highlight some of the most common food safety mistakes, CDC developed a series of short cooking show style videos called “Recipes for Disaster.” Viewers are invited to learn the right steps in food preparation as the fictional cook “Maria” does everything wrong.  In “Contaminated Carbo Load,” for example, Maria chops vegetables on an unwashed and unsanitized cutting board that previously held raw chicken and bacon. In “Bacteria BBQ,” Maria leaves steaks marinating on the counter overnight, “just as her Nanna did.” Maria’s family and friends enjoy her cooking but hours later suffer the consequences of her cooking mistakes.

The new study by Cohen and Olson cites a recent Harris Poll that finds “50% of consumers reported watching many of the hundreds of television cooking shows very often or occasionally.” Unfortunately, the researchers found that the percentage of shows in conformance with recommended food safety practices was much lower than that observed in restaurant employees and consumers.  For example, as the authors note, fruits and vegetables are the leading sources of foodborne illness in the US, yet less than 10% of the food shows they viewed demonstrated handling produce properly.  Additionally, in only 13% of episodes were food safety practices even mentioned.

Recommendations of the study authors include:

TV cooking shows have a wonderful but underutilized opportunity to demonstrate more than the latest and greatest ways to stuff zucchini or roast a chicken.  Modeling good food safety practices for millions of viewers could go a long way toward reducing foodborne illness.

2 Directions are for 5.25% bleach.  Decrease amount of bleach to 1 teaspoon per half-gallon if using 8.25% bleach.