UK “Brexit” discussions are sprinkled with speculation about allowing imports of “chlorinated chicken” from the US under a potential revised trade agreement. What is chlorinated chicken and why is the topic so controversial? According to the National Chicken Council (NCC), a “chlorinated chicken” is a chlorine-washed chicken, one that has been rinsed with chlorinated water. Often the chlorine is present in the form of chlorine dioxide. “Just as chlorine helps make drinking water safe, it can help remove potentially harmful bacteria from raw chicken,” states the NCC website. 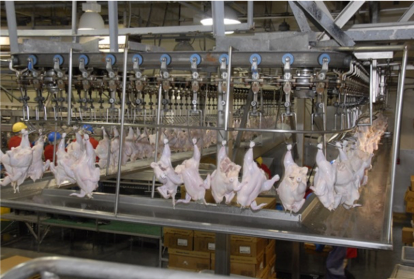 Chlorine solutions are used during food processing to destroy a wide variety of microorganisms that can put consumers at risk for foodborne illness. A 2009 University of Maryland report states chilling raw poultry in a water solution (of 50 parts per million free chlorine) can help reduce microbial contamination and control cross-contamination of food-contact surfaces. That said, the NCC notes that only approximately 10% of US processing plants use chlorine in rinses and sprays. Other products used include peracetic acid and cetylpyridinium chloride (CPC).

Is There a Risk from Using Chlorine Rinses and Sprays on Chicken?

When chlorine-based compounds combine chemically with organic matter in water or foods, a group of chemical compounds known as disinfection byproducts (DBPs) are formed. Studies are ongoing to understand the health effects of exposure to DBPs at the low levels encountered in treated water and foods, but there are no known likely risks at the levels to which people are normally exposed. To help ensure the safety of municipal drinking water, levels of DBPs are regulated by the US Environmental Protection Agency (EPA).

DBPs can also form when chlorinated water combines with foods, such as chicken, which is, after all, a type of organic matter. The 2009 University of Maryland study concluded, nevertheless, that 99% of the daily human exposure to DBPs is from drinking water, not foods. According to the study, “Poultry chilled with chlorinated water at 50 ppm accounts for only 0.3-1% of the exposure.”

A 2009 statement by Professor Yvonne Vizzier Thaxton of Mississippi State University describes a research study that confirmed using chlorine in the carcass washing process does not pose a human health concern. She conducted experiments to determine if certain DBPs known as trihalomethanes could form when poultry is exposed to various concentrations of chlorine during the chilling process. Not a single one of 65 DBPs tested for was detected. Professor Thaxton concluded that “…rather than creating a potential human health threat, the chlorine actually reduces the human health threat from the finished product.”

For some, “chlorinated chickens” have become a symbol of what they fear could be reduced food safety standards in the UK under potential new trade provisions. Antimicrobial sprays and washes are not widely used for poultry in the UK (though they are for fresh produce), yet the UK Food Standards Agency confirms bacteria levels in raw chicken are a concern. Health officials there monitor Campylobacter detection rates on raw chicken. Campylobacter is the most common cause of food poisoning in the UK. The UK preferred approach to food safety around poultry, however, is to encourage high standards for farming and production, according to a BBC article. Yet, the most recent testing detected Campylobacter in the majority (78%) of 1,024 samples of chicken skin in the UK.

Chlorine washes and rinses are not a panacea, which is why organizations such as the Partnership for Food Safety Education stress the importance of consumers cooking poultry to the minimum safe internal temperature (165 ⁰F), and not rinsing poultry in the kitchen sink to avoid contaminating nearby surfaces with splashed rinse water.

Food safety is a serious matter. Chicken produced in the US is monitored and inspected by the US Department of Agriculture’s Food Safety and Inspection Service. The appropriate use of EPA-approved chlorinated spray and wash solutions during poultry processing helps keep these popular products safe for consumers. Chlorinated sprays and washes, however, should never be used (a) to “cover up” bad food processing practices, or (b) as an excuse for consumers not to handle raw chicken with great care. But in the case of chlorinated chicken discussions in the context of Brexit, there’s a good chance that a public health issue has been hijacked by politics.