Cantaloupe Contamination: What Consumers Can Do to Help Reduce their Risk of Foodborne Illness

The evidence is mounting that cantaloupe food safety deserves increased attention from both producers and consumers.  Three recent contamination incidents support the need for new approaches.  First, an unidentified farm in southwestern Indiana is believed to be the source of Salmonella-contaminated cantaloupe that infected 141 people in 20 states between July 7 and August 4, and resulted in the deaths of two people from Kentucky.  According to news reports, the farm in question agreed to suspend cantaloupe sales for the rest of the season.  In another incident last month, Burch Farms in North Carolina produced Listeria-contaminated honeydew melons, necessitating a recall of cantaloupe and honeydew melons from that farm (see FDA News Release); no illnesses were reported from that incident. 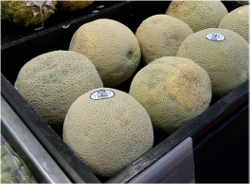 The rough texture of the cantaloupe rind provides many potential attachment points for dirt and associated bacteria.

Finally, last October I reported on a tragic foodborne illness outbreak involving cantaloupe and Listeria bacteria. Thirty people died and nearly 150 were sickened by consuming cantaloupe produced by Jensen Farms in Colorado.  The US House of Representatives Committee on Energy and Commerce released a report outlining multiple operational problems contributing to the cantaloupe contamination at Jensen Farms.  The report emphasized two probable causes of contamination: a change in processing equipment and a decision not to chlorinate cantaloupe wash water.  FDA voluntary guidelines for producers include measures to reduce bacterial contamination on harvested fruit by using antimicrobial solutions, such as chlorine, in cantaloupe wash water.

What’s a Consumer to Do?

The cantaloupe fruit grows in direct contact with soil, which naturally hosts bacteria that can be harmful to humans. Furthermore, if animal manure or inadequately composted animal manure is used as a crop fertilizer, the likelihood of disease-causing bacteria is greatly increased.

Removing soil and debris from cantaloupe rind is particularly important because its rough texture provides ample attachment points for bacteria. By cutting into a cantaloupe without first washing the fruit, consumers risk contaminating the edible fruit via the knife as it transports bacteria from the rind to the flesh.

Regardless of the actions that may have been taken by cantaloupe producers to reduce contamination, consumers need to be aware that their purchased cantaloupe could contain harmful bacteria attached to the rind.

iBased on recommendations from a news release by the Wisconsin Department of Agriculture, Trade, and Consumer Protection and FDA.