It’s January, and norovirus, known as “winter vomiting virus,” the “stomach bug” or the “stomach flu,” is on the move in the Northern Hemisphere. Norovirus is not the same as the seasonal flu, but both are off to an early start this year. The seasonal flu is a respiratory illness caused by the influenza virus, whereas norovirus inflames the gastrointestinal tract and causes vomiting and diarrhea. In a creative use of robotics, scientists in Great Britain are learning how the virus spreads when sick people vomit. 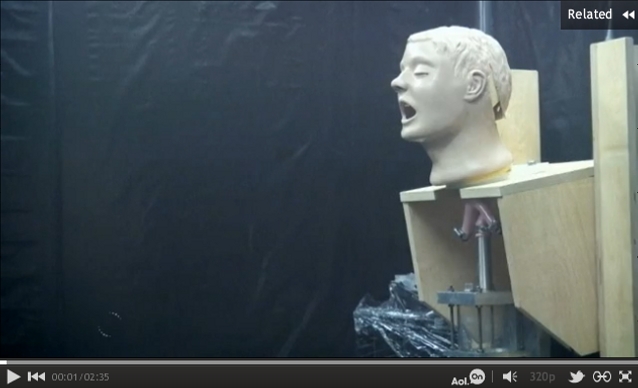 Even though flu can cause nausea and vomiting, particularly in children, any vomit or diarrhea may contain norovirus and should be treated as though it does.

Vomiting Larry is a “humanoid simulated vomiting system” designed to help scientists analyze contagion, according to a Science Daily article. Vomiting Larry was developed by Catherine Makison-Booth at the Health and Safety Laboratory in Derbyshire, northern England. Larry consists of a mannequin head with simulated tongue, teeth, esophagus and stomach. A calibrated piston pushes fluid up and out of Larry’s mouth to simulate vomiting.

Larry has been helping scientists understand the spread of norovirus. Professor Ian Goodfellow of the University of Cambridge describes norovirus as “the Ferrari of the virus world” for its ability to infect hosts with fewer than 20 virus particles. Dr. Goodfellow notes “…each droplet of vomit…from an infected person can contain enough virus to infect more than 100,000 people.”

Larry is infused with a “vomitus substitute” that includes a fluorescent marker to help track even very small splashes. In experimental trials, researchers identified vomitus droplets as far as three meters away from Larry, helping them understand the need to disinfect surfaces farther from a vomiting incident than one might expect. The plot thickens, however: Because tiny norovirus particles can float through the air, people in the vicinity of a vomiting person can become infected simply by having the virus enter the mouth or contact the eyes.

In 2012, representatives of the Water Quality and Health Council, the New Jersey Somerset County Health Department, the National Environmental Health Association , the US Centers for Disease Control and Prevention and the American Chemistry Council collaborated to develop a series of posters with explicit directions on disinfecting surfaces against norovirus using chlorine bleach and water solutions.

One of these posters instructs on disinfecting surfaces following a diarrhea or vomiting “event” and the other is meant for stepped-up routine surface disinfection when norovirus is known to be present in the community. Both posters may be freely downloaded in either English or Spanish. Additionally, for a limited time, color, laminated posters are available by contacting the Water Quality & Health Council at 202-249-6705.

We hope you get through norovirus season “without incident,” but if you don’t, keep in mind what researchers have learned:

Barbara M. Soule, R.N. MPA, CIC, FSHEA is an Infection Preventionist and a member of the Water Quality & Health Council.