Although it once exacted a toll of hundreds of thousands of cases of illness and death in North America every year, most of us rarely say the words “typhoid fever”, or give the disease much thought.  Drinking water treatment, including filtration and chlorination, and good food safety standards have virtually eliminated typhoid fever from our midst, enabling us to take for granted the overall safety of our water and food.  Yet, in developing lands especially, the typhoid bacteria, Salmonella typhi and Salmonella paratyphi, still thrive in human hosts.1  How Salmonella infects people is the subject of a recent scientific inquiry, yielding insight into the modus operandi of this notorious killer. 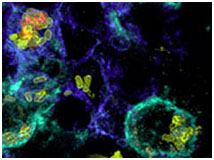 Salmonella: A Moving Target for the Human Immune System

A University of Basel research team describes in a new publication in the journal “Cell Host & Microbe” how Salmonella stages a multi-front battle with the human immune system when infection occurs. A January 16 press release on the study characterizes Salmonella infection as “a race against time,” in which low levels of the pathogen evade the host’s immune system by repeatedly escaping abscesses formed around sites of infection in the body.  The researchers note that although most Salmonella bacteria are destroyed by an immune system reaction, only a few survivors from each abscess may succeed in relocating to a new site in the body, helping to ensure Salmonella’s survival. Ultimately, the course of the disease is determined by the net outcome of these pathogen/immune system skirmishes.

Typhoid Mary: Captive to the Public’s Health by Judith Walzer Leavitt, recounts the story of the feisty turn-of-the-century New York cook Mary Mallon, who inadvertently spread typhoid fever to 22 people between 1900 and 1907. With no symptoms of the disease herself, Mary eluded public health authorities who finally identified her through epidemiological detective work. Once apprehended, she spent the last three decades of her life forcibly isolated from the public. Leavitt combines public health history and ethics in this fascinating read.

According to the University of Basel press release, each year more than 20 million people contract typhoid fever. The battle against this killer is concentrated today in developing countries where efforts to improve the safety of drinking water and raise hygiene standards are critically needed. News of the University of Basel research findings demonstrates, however, that the laboratory presents another significant front in this battle against typhoid fever.  By revealing Salmonella’s modus operandi, the researchers have scored a victory that may lead to new treatment strategies:  the more we know about how Salmonella infects the body, the better suited we are to devise ways to thwart it. This is especially important given the growing problem of antibiotic resistance. To banish typhoid fever to the annals of history, we need to take a page from Salmonella’s modus operandi and work on multiple fronts to achieve as many victories as possible.  Lives depend on it.

For more information on typhoid fever, see this US Centers for Disease Control and Prevention website.