New Tools to Help Reduce the Spread of Norovirus

Each year an estimated 20 million Americans are sickened by a highly contagious virus that usually turns up in force in late fall and hangs around until early spring. Norovirus, aka the “stomach bug,” “winter vomiting disease,” or “stomach flui” is an uninvited guest at nursing homes, schools, holiday parties, and wherever people congregate.  It is the leading cause of outbreaks of diarrhea and vomiting in the US, and it spreads like wildfire because (brace yourself) the vomit and diarrhea of infected people contain billions of norovirus particles.  Viruses are extremely small—smaller than bacteria—and norovirus particles can float through the air, settling on environmental surfaces where they can remain alive or infectious for weeks while they await their next host. 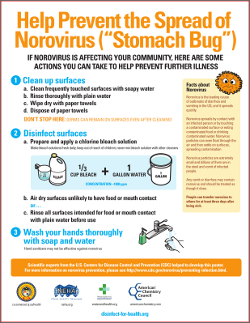 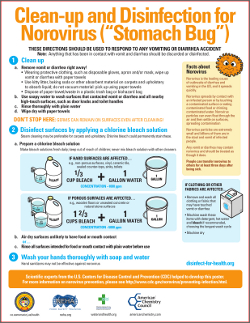 These posters may be viewed at higher resolution under: Posters.

Recognizing the need for effective resources to help battle norovirus, a team of public health partners (New Jersey Somerset County Health Department, the Centers for Disease Control and Prevention (CDC), the Water Quality & Health Council, the National Environmental Health Association and the American Chemistry Council) collaborated to produce two new posters: One features plain-language directions for responding to a vomiting or diarrhea incident; the other gives clear directions for routine disinfection when norovirus is known to be affecting the community.

Just How Contagious is Norovirus?

A 2010 norovirus outbreak among a girls’ soccer team demonstrates how easily the virus can spread. One player became sick during a tournament in Seattle. The girl spent the night in a chaperone’s room and used the bathroom several times. Stored in the bathroom was a reusable grocery bag filled with cookies and chips. After eating snacks from the bag, six other team members became sick with the same strain of norovirus. Although the girl had not touched the bag, she was the likely source of the infectious norovirus particles that had settled through the air of the bathroom onto the bag and its contents.

Norovirus is characterized by diarrhea, vomiting, nausea and stomach cramping, according to the CDC. Less common symptoms include low-grade fever, chills, headache, muscle aches and a general sense of fatigue. Most people get better in one to two days (though they may remain contagious for at least three days after being sick), but in the elderly, young children and people with health conditions, norovirus can lead to severe dehydration, hospitalization and even death.

Norovirus can be spread by direct contact with an infected person or by an individual touching a contaminated surface and then touching their mouth or nose. Norovirus is the leading cause of foodborne illness in the US, and can be transmitted through foods prepared by sick food handlers.

Older people are most susceptible to norovirus, according the CDC, followed by children under the age of five. Approximately 800 deaths are attributed to norovirus annually, but this toll can climb to about 1200 when new strains emerge.

Poster directions for mixing bleach solutions are based on CDC protocols and those promoted by many state health departments. These posters are freely available for download in English or Spanish, color or black-and-white and large (11”x17”) or small (8.5”x11”), on the website of the Water Quality & Health Council. The public health partners who created these resources truly hope that their efforts will make a difference by curtailing the spread of norovirus.

i“Stomach flu” is a misnomer because norovirus is unrelated to influenza viruses.