Ahhh-choooo! An uncovered sneeze projects mucous particles into the air in a way that MIT scientists say permits the resulting “cloud” to travel farther than scientists had previously estimated (MIT press release). The short video above captures this “cloud” using high speed imaging.  This research could help improve infection control in hospitals, workplaces, airplanes and other environments.

The MIT researchers tell us that a sneeze is more than an expulsion of mucous droplets; a sneeze is an expulsion of mucous droplets within a gas cloud, not unlike “a puff emerging from a smokestack”. The gas medium of this “puff” supports the buoyancy of small mucous droplets, carrying them from five to 200 times farther1 than they would travel in the absence of a gas cloud.  In fact, when we sneeze, small droplets travel farther than large droplets because they are more readily entrained in swirling air currents within the cloud.  In the absence of the gas cloud, we would expect larger droplets, which have greater momentum, to travel farther than smaller ones. 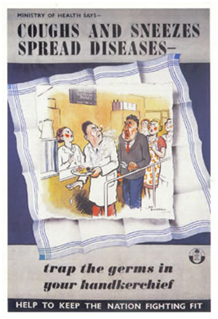 Sneezing is an involuntary response to triggers like allergies, colds, mold, mildew, dust, pepper, cold air, strong fumes and odors. Sneezing, a runny nose and coughing are efficient vehicles for spreading infectious illnesses like colds and flu. The sneeze projects mucous droplets forward where they may be inhaled by others or contaminate commonly touched surfaces.

The Centers for Disease Control and Prevention (CDC) notes that personal hygiene recommendations for preventing the spread of illness through sneezing has changed over the years (see website).  The vintage poster at right from World War II urges the use of handkerchiefs to “trap the germs”.  Modern CDC recommendations urge the use of disposable tissues and hand washing following tissue disposal.  That’s a little different from raising your elbow to your face to cover up the sneeze, which the MIT press release suggests.  If a disposable tissue is not available, the next best option is to cough or sneeze into your upper sleeve or elbow, not into your hands.

In their study of the fluid dynamics of the sneeze, the MIT researchers have made an important contribution to our knowledge of the propagation of infectious illnesses. According to the researchers, droplets less than about 50 micrometers in diameter can remain airborne long enough to reach ceiling ventilation units. Once entrained in these units, the potential reach of droplets could increase considerably. What are the implications, then, for ventilation systems, air filters and surface disinfection in the indoor environment? We look forward to future work building on this impressive foundation.