Sepsis is the body’s overwhelming and 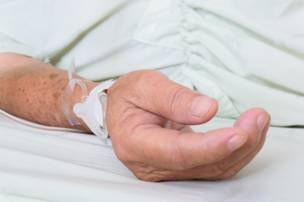 life-threatening response to infection. Sepsis causes inflammation throughout the body, which can lead to tissue damage, organ failure, and even death, according to the Centers for Disease Control and Prevention (CDC). Sepsis is a serious complication of septicemia, also known as bacteremia or blood poisoning. Septicemia occurs when a bacterial infection somewhere in the body (e.g., the skin, kidneys, urinary tract, abdominal area or lungs) spreads into the bloodstream.

We recently wrote about human Vibrio infections from contaminated shellfish and coastal and especially brackish waters. Some Vibrio infections progress to sepsis, which is why we highlighted the Louisiana Department of Wildlife and Fisheries advisory that fishermen in saltwater carry with them “basic disinfectant (chlorine bleach mixed one part bleach to four parts fresh water1 or tincture of iodine, or antibiotic ointment) and use if skin is punctured while handling fishing tackle, bait or fish.”

According to the Mayo Clinic website, sepsis is diagnosed when at least two of the following signs accompany a probable or confirmed infection:

Severe sepsis is diagnosed with at least one more of the following, which indicate an organ may be failing:

Toxins released into the bloodstream by some bacteria can cause extremely low blood pressure. Septic shock results when the patient does not respond to simple fluid replacement. Septic shock can lead to death. Whereas most people recover from mild sepsis, the Mayo Clinic website indicates a 50 percent mortality rate for septic shock. The image above, from the CDC Sepsis Fact Sheet, lists major strategies for preventing sepsis.

Who is Vulnerable to Sepsis?

Anyone can develop septicemia and sepsis, but according to the Mayo Clinic the most vulnerable include the very young and very old; patients taking immunosuppressive medications; cancer patients; long-term steroid users; people with long-standing diabetes, AIDS or cirrhosis; people with large burns or severe injuries; and people with infections, such as pneumonia, meningitis, cellulitis and urinary tract infections.

Sepsis is a medical emergency that requires treatment. There are more than one million cases of sepsis each year in the US. Sepsis can lead to septic shock and death; survivors of sepsis may suffer permanent organ damage and have to deal with life-changing health effects.

The CDC recommends calling your doctor or going to the emergency room immediately if you have any signs or symptoms of an infection or sepsis. CDC urges that you state, “I AM CONCERNED ABOUT SEPSIS” to ensure timely evaluation and treatment, which may include antibiotics, oxygen and intravenous fluids. The image below from the CDC Sepsis Fact Sheet may be helpful in determining when to seek medical attention. Forewarned is forearmed! 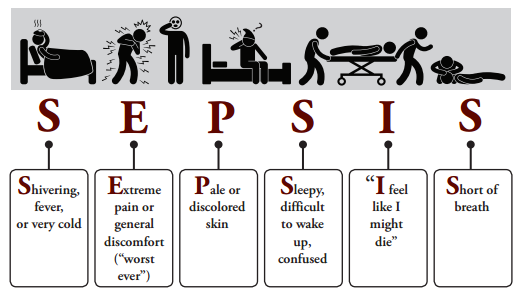 1 Fishermen should prepare this solution daily, as bleach solutions weaken over time.