The notorious kitchen sponge—that germ-ridden object found in many households—is at the center of a new controversy about controlling the spread of infections in the home. Several years ago we reported a University of Florida research team found microwaving 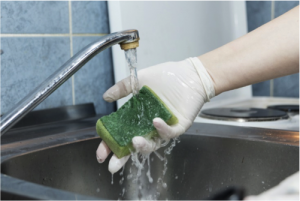 very wet sponges for two minutes at high power killed or inactivated over 99 percent of all the living pathogens in sponges and cleaning pads that had been soaked in a “witch’s brew of germs.” Easy and convenient, right? Think again: A team of German researchers using genetic techniques to characterize sponge microbes says that neither boiling nor microwaving sponges may be particularly effective in the long run. Careful testing of alternative sponge treatments is needed, but in the meantime, the researchers recommend the best course may be ditching your kitchen sponge once per week for a new one.

First, the German team found the density of bacteria in some portions of 14 German kitchen sponge samples to be equivalent to that found in feces! Significantly, their data show “…regularly sanitized sponges (as indicated by their users) did not contain less bacteria than uncleaned ones.” But in an interesting, Darwinian twist, the researchers suggest the most resistant bacteria in sponges preferentially survive boiling or microwaving, only to repopulate the sponge rapidly after these treatments. Some of these are more pathogenic too, for example, “RG2-related bacteria” identified in the test sponges may have the potential to cause diseases in humans. The scientists state, “…a prolonged application of sanitation measures of kitchen sponges is not advisable.” In other words, the more you “challenge” sponge microbes with disinfection, the more you may encourage the survival of the fittest and most likely to make you sick.

Because kitchen sponges are moist, have high surface area, and are frequently wiped over food preparation and dining surfaces, they are a major agent of cross-contamination. Ironically, the more kitchen surfaces are wiped by the conscientious house cleaner with a contaminated sponge, the more contaminated the surfaces may become. For example, one of the resistant bacteria shown to survive treatment, Moraxella osloensis, is common in sponges and is found consistently on sink, faucet, refrigerator door and stove surfaces. You may have smelled Moraxella; it imparts a disagreeable odor to sponges and laundry.

The new study demonstrates the ongoing nature of scientific investigation: What we once thought true may not stand the test of the next investigation. The scientific method requires continual testing and reformulation of hypotheses based on meticulously collected data. The scientific method does not guarantee that any given conclusions are correct. The German researchers correctly note that additional studies in this area are needed. We agree and wonder if soaking kitchen sponges regularly in appropriate chlorine bleach and water solutions would be effective. For now, the advice to replace sponges weekly is prudent, but stay tuned!