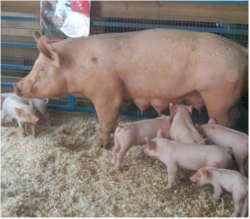 County and state fairs are popular late-summer events in many regions of America. In addition to cash for the carnival rides, funnel cakes and “food on a stick”, this year’s fair-goers should equip themselves with an awareness of a new flu strain that is being spread by pigs to people—a variant of H3N2 called H3N2v. Similar to the H1N1 2009 pandemic swine flu strain, H3N2v is a variety of influenza type A. Even healthy looking pigs may carry the flu virus, according to a report on a new study by University of Minnesota veterinarian Dr. Jeff Bender. A healthy dose of precaution is in order for fair-goers visiting pig sties.

Human cases of the H3N2v virus surged recently from 29 to 145 cases during the week of August 5, according to the Centers for Disease Control and Prevention.  As of Friday, August 10, the Centers for Disease Control and Prevention (CDC) confirmed 153 cases.  Two people were hospitalized; there have been no deaths from this virus.  According to Medscape, the 2012-2013 vaccine is not expected to provide substantial immunity to the virus, but a vaccine specific for H3N2v could be produced if needed.

In a recent CDC telephone conference reported in Family Practice News, medical epidemiologist, Dr. Joseph Bresse characterized the severity of the human illness associated with the virus as resembling that of seasonal flu, with most cases mild, self-limited and resolving on their own.  Most people who have had the flu have had contact or exposure to pigs prior to the illness, and many cases are associated with county and state agricultural fairs where pigs were being shown.

Dr. Bresse stated there is no evidence of sustained human-to-human transmission, though this can change, and the outbreak does not represent a pandemic situation.  CDC is concerned about the H3N2v virus, however, because it contains an element seen in the H1N1 virus that may make it more likely to spread from person to person.  CNN reported the Indiana state health commissioner found the overwhelming percentage of cases in that state were based on transmission from ill or infected swine to their handlers, which in most cases are children. Other cases occurred in farmers or veterinarians.

So enjoy the fair, but stay aware!