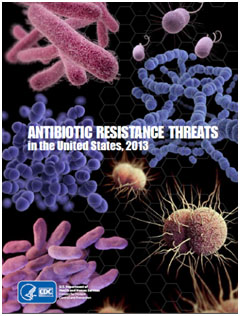 This article focuses on preventing infection by targeted environmental surface disinfection with the goal of avoiding the use of antibiotics in the first place. Reducing antibiotic use in healthcare facilities, according to CDC, has been shown to reduce resistance in those environments, a promising step in the right direction. Infection prevention should be a priority in all healthcare settings.

Infection Prevention by Surface Disinfection in the Healthcare Setting

According to CDC, risks of infection are increasing, not only due to emerging antibiotic resistant microbes such as Methicillin-resistant Staphylococcus aureus (MRSA) and Vancomycin-resistant Enterococcus (VRE), but also due to the increase in susceptible populations, such as dialysis patients and residents of long term care facilities. Infection prevention by targeted environmental surface disinfection is one critical factor in reducing illness and death in these populations.

Contaminated surfaces can be the source of a wide variety of bacteria and viruses – posing significant health risks to patients and healthcare professionals alike. After cleaning frequently touched surfaces, such as bathroom fixtures, doorknobs and handrails, for example, disinfecting them provides an additional safeguard against the transmission of illnesses. The CDC Guidelines for Environmental Infection Control in Health-Care Facilities provide evidence-based recommendations for preventing “environmentally-mediated” infections.

Targeted disinfection halts the spread of pathogens from environmental surfaces to human hosts; it is only one part of CDC’s plan to combat antimicrobial resistance, but as a direct, effective measure, it should be implemented in healthcare settings without question.

C. difficile is one of the top hospital- and nursing home-acquired pathogens in the US. It causes life-threatening diarrhea, and CDC classifies “C. diff” as an “Urgent Threat.” Although resistance to the antibiotics used to treat C. difficile infections is not yet a problem, the infection spreads rapidly because it is naturally resistant to many drugs used to treat other infections, such as fluoroquinolone antibiotics. A new strain of C. difficile that emerged in 2000 increased death rates by 400 percent by 2007, according to CDC.

In a 2011 publication, Dr. Robert Orenstein of the Mayo Clinic Arizona showed the use of wipes moistened with a 10 percent hypochlorite bleach solution reduced hospital-acquired C. difficile infections by 92 percent over a six-month period. This result was achieved without any other interventions, such as increased attention to hand hygiene. The results were sustained for over one year with only two infections in 12 months. Meanwhile, infection rates in other units in the study hospital remained high.

1See, for example, the Get Smart About Antibiotics program.