Chlorine Bleach: A Trusted Ally in the Battle against Ebola

A group of San Diego women with close ties to the West African nation of Liberia is raising funds to help fight the Ebola outbreak in that country. Their chosen weapon:  buckets of bleach.  In a recent video, Deborah Lindholm, the founder of the group, Foundation for Women, describes life today in Liberia:  “There are no handshakes, no touching, no hugging; there is just complete and utter fear in Liberia right now…There are buckets of bleach all over the streets in Liberia and the people in Liberia and in the surrounding areas that have been affected by Ebola understand that if they keep their hands clean they can kill off the virus.”

Hand washing is an extremely important component of infection control as germs picked up on the hands are readily transferred to the eyes, mouth and nose by touching.  Keeping all settings clean—homes, healthcare settings, schools and workplaces—is another critical factor in infection control because it helps prevent hands becoming re-contaminated between hand washings. 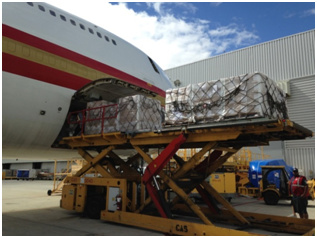 Thousands of gallons of concentrated chlorine bleach and other critical equipment are loaded into the cargo hold of an airplane destined for Sierra Leone, September, 2014. World Vision and the American Chemistry Council coordinated the humanitarian airlift to help fight Ebola.  Chlorine bleach was donated by Olin Corporation; domestic transportation services for bleach were donated by CSX Corporation and the Buffalo and Pittsburgh Railroad; bleach bottling services were donated by The James Austin Company.

According to the World Health Organization (WHO), “The Ebola virus can be eliminated relatively easily from surfaces using heat, alcohol-based products, and sodium hypochlorite (bleach) or calcium hypochlorite (bleaching powder) at appropriate concentrations.” The Ebola virus can live on inanimate surfaces, especially those that are soiled with blood or other body fluids from infected people.  In the later stages of Ebola, when patients experience internal and external bleeding, they may vomit blood or have bloody diarrhea, all potential sources of infection for those around them.

WHO recommends surfaces or objects contaminated with blood, other body fluids, secretions or excretions from Ebola patients be cleaned and disinfected 1 as quickly as possible.2  The following information on bleach use against Ebola is based on a September, 2014 WHO guidance document: 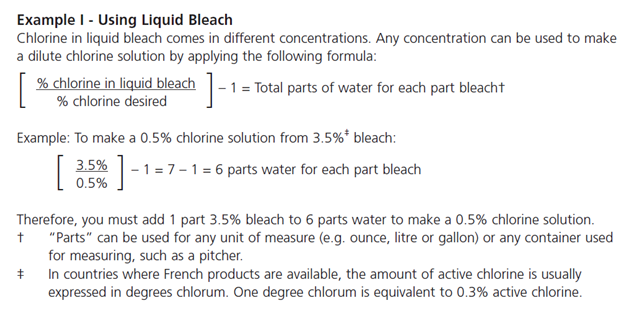 In the rapidly unfolding saga of the West African Ebola outbreak, the critical role of surface disinfection is highlighted repeatedly by public health professionals along with public education, isolation and quarantine, contact tracing, good hygiene and personal responsibility.  From sanitizing healthcare environments used for Ebola patient care, to airplanes used for international travel, to homes formerly inhabited by Ebola patients, chlorine bleach proves time and again to be a trusted ally in the raging battle against Ebola.

For further information on Ebola, please see the Centers for Disease Control and Prevention website and our article Ebola:  What You Should Know.

1 Disinfectants are defined by EPA as either hospital or general use types. Disinfectants destroy or irreversibly inactivate infectious fungi and bacteria but not necessarily their spores.

2 Chlorine solutions of various concentrations are also recommended for machine-laundering contaminated linens, decontaminating equipment such as goggles and visors and even body bags containing Ebola victims.